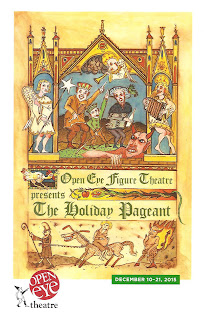 Continuing with my marathon weekend of holiday shows (read more about that here), last night I saw Open Eye Figure Theatre's Holiday Pageant. Like Black Nativity is to Penumbra Theatre, The Holiday Pageant is Open Eye's annual tradition. And like Black Nativity, I had never seen it before this year. The show began as an entertainment for family and friends in the home of Open Eye Co-Founders Susan Haas and Michael Sommers (who wrote, directed, and designed this version), and has since expanded into the show currently on the charming, intimate, adorably tiny stage of Open Eye. The production values may have increased, with beautiful sets and costumes and a 12-person choir singing original songs by Victor Zupanc, but it still has that homey feel of a family pageant. We're luck that Susan and Michael have invited us into their home and family to experience this oddly sweet little gem.

While The Holiday Pageant does tell the familiar Nativity story, it's from the perspective of angels and devils, enacting their eternal struggle on earthly humans. The Devil (a dark and creepy Michael Sommers) is bored because "mankind has become so base and vile that he has nothing to do." He decides to visit his enemy, the "Alpha and Omega" (voiced by Susan Haas on trombone) to see if anything can be done. This leads to the Nativity story as we know it, sort of. The details are entrusted to the angel Gabriel (Noah Ophoven-Baldwin, speaking through his trumpet) and angel-in-waiting (the always entertaining Sarah Agnew, who also plays the devil's servant Teufel, like flip sides of the same coin). They eventually find Mary (Liz Schachterle) and Joseph (master storyteller Kevin Kling), and things unfold more or less as you would expect, complete with shepherds (the always hilarious Luverne Seifert, and Noah Sommers-Haas, playing his part in the family tradition). It's a unique, creative, and very Open Eye retelling of this story that has been retold for 2000 years.

The Pageant was inspired by Medieval Mystery Plays, which is obvious from the design. Framing the stage is a painting that looks very medieval (not unlike the playbill above), with intricate gold designs and the almost cartoonish look of medieval figure painting. Behind the curtain are a series of brightly painted two-dimensional sets to represent heaven, hell, and the earth between them. And of course, there are puppets, mostly to represent smaller versions of the characters in the background, and Teufel's odd play about Adam and Eve (I smell an Ivey!).

The Holiday Pageant is whimsical and endearing, with plenty of adult humor that will hopefully go over the little ones' heads. It feels very much like friends and family putting on a pageant to entertain themselves and each other, and those of us lucky enough to be in the audience get to enjoy it as well. Playing just through next weekend (ish), the small space fills up fast, and several performances are already sold out, so get your tickets now if you'd like to add this to your holiday theater roster.