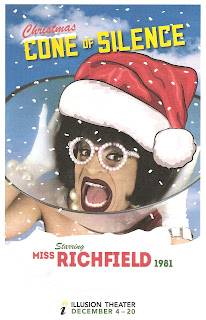 To complete my marathon five-show holiday theater weekend, I finally saw the legend that is Miss Richfield 1981. Or rather, experienced. For Miss Richfield is more than just a show, it's an interactive night of outrageous comedy! For her 17th year of performing at Illusion Theater, she shares with the audience the Christmas Cone of Silence. Meaning a frank discussion just between her and the audience (the biggest I've seen at Illusion) about the things you're not supposed to talk about. Since I'm quite happy in my own cone of silence, I took a seat at the back of the theater where I was (barely) safe from her questions. Interactive theater is great fun, as long as I'm not the one being interacted with! Miss R is fantastic at talking to the audience, drawing people out, and making anything they say seem funny. But politically correct she's not; she's an equal opportunity offender, so be prepared to be a bit shocked at some of the things she says. But mostly, be prepared to laugh and have a good time.

As you would expect from a former Miss Richfield (portrayer and writer of the show Russ King really did grow up in Richfield) this show is chock full of hometown humor. Jokes about St. Paul, Maple Grove, Fridley (the Richfield of the North), and all things Minnesota. In the first act, Miss R talks to people in the audience and even brings a few onstage for a difficult-to-talk-about spelling bee. The second act turns festive, as she brings out only her best Christmas decorations from her trailer, and leads a few lucky audience members in decorating their own holiday cones. She also leads a singalong (with piano accompaniment by Todd Price) of Christmas carols, except that she matches the words on her overhead projector to the wrong tune! This is great fun and actually works remarkably well (try singing "Frosty the Snowman" to the tune of "Ave Maria" - it works!).

In addition to the jokes and discussion with the audience, Miss Richfield sings a few hilarious original songs, and shares a few videos she's made. One is an ad for an elder care product, and another is about her love for a certain reality show and radio host.

Miss Richfield 1981 is a riot in a bouffant wig, too-short dress, and the highest of heels. She obviously has a large and devoted following, and it's well-deserved due to her humor, charm, and skill at drawing the funny out of (sometimes reluctant) audience members. Only four shows remain so catch her while you can!