"All Is Calm" by Theater Latte Da at the Pantages Theatre 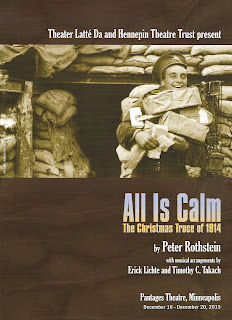 This is my fourth time seeing and writing* about Theater Latte Da's annual holiday show All Is Calm, presented with Hennepin Theatre Trust at the Pantages Theatre. This true story about peace in the midst of war is so beautifully told by creator/director Peter Rothstein, using period music and authentic writing from the time, that I could easily see it every year. It is the 11th holiday show I've seen this year** and my favorite because it best represents the true spirit of the season - connection, community, forgiveness, peace. The show underwent a significant change in this, its eighth year. The marvelous vocal ensemble Cantus is no longer in the show. Instead, Peter has cast a dozen talented singer-actors. I wasn't sure how this show would work without Cantus because they were such an integral part of the experience. But I needn't have worried, because if anything, it's even better than it was before. The music (brilliantly arranged by Erick Lichte and Timothy C. Takach) sounds just as gorgeous, and the addition of a cast full of actors, now sharing the stirring words of soldiers amongst all of them rather than just a few, humanizes the stories even more. The result is a piece of music-theater that's just about as perfect as one could be - a story told simply, effectively, and beautifully in a way that perhaps comes close to the beauty of the real experience of the Christmas Truce of 1914.

This story about soldiers on both sides putting down their weapons, meeting between the trenches, and sharing a day of songs, games, and laughter is told in just over an hour in a seamless flow of words and music, with no annoying applause breaks to interrupt the story. We follow these soldiers from the excited early days of the war ("we'll be home by Christmas!") to the real hardships of life in the trenches, to the unexpected and much welcomed peace of the truce, to the reluctant return to the business of war. This wonderful cast (some of whom are tagged in this post) delivers excerpts of letters, journals, newspaper articles, and the like in a wide variety of accents specific to the region of origin. We hear the names of each of these men, which feels like we're invoking their spirits into the space, making this a holy experience of sorts.

Throughout the story is the never-ceasing music, both wartime songs and Christmas songs, including the traditional German carols that I love so well (having spent one Christmas in Salzburg). The songs both familiar and new are delivered in stunning a capella. A song like "Silent Night," that I've heard and sung so many times I usually find it boring, becomes like something I've never heard before with this brilliant arrangement, sung by these twelve men in exquisite harmony, made even more powerful within the context of this story.

The simple staging subtly adds to the piece, while allowing the story to be the main focus. The men are all dressed in black - sweaters, coats, hats, uniforms, even a few kilts. A few crates and boxes are the only set pieces, and the movement of the cast around the stage is quite beautiful, effective, and appropriate to whatever part of the story is being told. All of the pieces fall into place in this impeccably researched work that has been honed and refined through years of performance.

I couldn't help but think of the irony that upon entering the Pantages Theatre, our bags were searched and we were asked to hold out our arms as guards waved a wand over our bodies, looking for weapons, I assume. One hundred years after this remarkable show of peace, and we can't even trust people to put down their guns to go to the theater. It's a sad and scary world that we live in, and many people around the world are living in trenches of their own, but All Is Calm reminds us that peace, however unlikely, is possible.

All Is Calm continues through this weekend only at the Pantages Theatre.


*Read my thoughts on previous productions of All is Calm here.
**Read about the other ten holiday shows I've seen here.