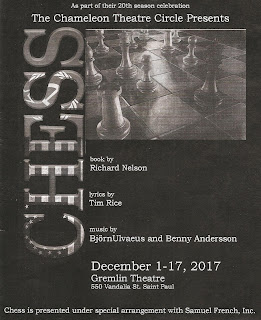 Before last year, I had never heard of the musical Chess. Although I consider myself a musical theater nerd, I rarely listen to musicals I've never seen, so it makes sense I didn't know about this rarely produced 1980s musical written by Tim Rice and the Bs of ABBA. But thanks to Second Fiddle, which stages one-night-only readings of rare musicals, I recently became aware of its charms. Chameleon Theatre Circle's new production of Chess as part of their 20th season (bringing back a favorite from their 2nd season) is the first full production I've seen. And I have to say, I kinda love it. It's fabulously cheesy and very '80s, but it put a smile on my face, which I needed on a wintery Monday. The cast is really strong, with no weak link among them, and performs this intricate score well along with the terrific onstage band. You can't do Chess halfway, you have to go at it full force, and they do, and it's kinda awesome!

Chess has a long and complicated history, from concept album to London production to Broadway, which I'm not going to go into here. If you're interested, check out the Wikipedia page or my fellow Twin Cities Theater Blogger Keith's post at Life in Revue. What's being presented at Gremlin Theatre is the story of a chess tournament between rivals: the American Freddie and the Soviet Anatoly. But to me, maybe because of where we are at this moment in our culture, this is really Florence's story. She's Freddie's second and ex, but falls in love with the married Anatoly, and is in search of her past and family in Hungary where the second act takes place. I found her the most compelling character. Freddie's an arrogant jerk, and Anatoly, while more sympathetic, leaves his wife and children for no apparent reason. Both Florence and Anatoly's wife Svetlana are strong characters, and even though their lives do sort of revolve around the men, they're the ones I care about (similar to how the women are the best part of Mad Men). There's a complicated bit about Anatoly defecting from the USSR to the USA, and then going back, and Florence's past being somehow used in that exchange. It's all a little convoluted and I didn't bother too much trying to follow the plot. The strongest part of this piece is the music and the characters, who come alive during the songs.

The Cold War might be over, but the US/Russia relationship is as timely as ever, which makes this piece take on a whole new meaning (it's some kind of weird irony that this arrogant American bastard of a celebrity is named Trumper, which sounds eerily familiar, except that this one hates Russians). The lyrics about borders and wars, and the theme of refugees and immigrants and finding a place to call home, are all just as meaningful in 2017 as they were 30+ years ago.

Sarah DeYoung makes her #TCTheater debut in this show as Florence, and I for one hope to see much more of her in the future on stages around town. She's fantastic, with a strong voice and a compelling stage presence. Michael Burton and Carl Swanson are both great as Freddie and Anatoly, respectively, and sing the heck out of this score. Emma Foster is a delight when Svetlana finally finds her voice in the second act; she's a great duet partner with Sarah/Florence and I wish this character were more developed so we could see more of her. Other highlights include supporting players Scott Dutton as Anatoly's second Molokov, and Jakob Gomez as the mysterious agent Walter. And everyone in the hard-working ensemble plays their role(s) well.

This is the first musical presented at Gremlin Theatre's new space, and it works well. The orchestra of about a dozen members is seated at the back of the thrust stage, partially hidden by curtains but still in view. The score is sort of a mix of early '80s pop and rock with a more classical/Eastern European sound, and music director/conductor Dale Miller keeps the complicated melodies and lyrics on track. The stage space is comprised of black and white squares like a chess board, and at times the cast moves around the stage like chess pieces, performing aggressive dance moves. They use the space well, both on the stage and off (direction by Bradley Donaldson and Jim Vogel, choreography by Marlo Teal). There is an actual chess board in the match scenes, and I wish I knew more (or anything) about chess to know if they were actually playing a real game (but it looks real enough).

If you're a musical theater nerd, either one who already knows this piece or who needs to learn about it (like me), you should definitely check out this production. It's a great piece (at least musically), the whole team puts in great effort, and it's just awesome cheesy fun. Continuing at Gremlin Theatre in St. Paul through December 17.