"Blithe Spirit" at the Guthrie Theater 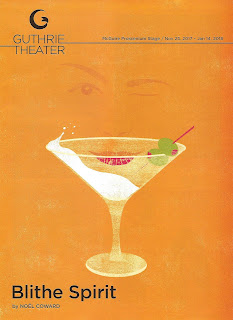 If you're looking for a fun, light-hearted, escapist night at the theater (and really, who isn't in need of that?!), look no further than the Guthrie's sublimely entertaining production of Noël Coward's Blithe Spirit. Featuring Guthrie favorites and newcomers in this perfect concoction of a cast, breath-takingly gorgeous design, and the witty words of one of 20th Century England's favorite writers of comedy, Blithe Spirit will keep you warm with laughter on a cold winter's night, and make you forget about the seemingly endless despair happening outside of the theater walls (this is why I prefer to say in the theater as much as possible). Blithe Spirit continues through January 18 and is a hilarious duet partner to that other ghost story across the hall.


In Blithe Spirit, Charles and Ruth Condomine live a happy peaceful life in their summer home in the English countryside, despite having to train in a rather incompetent new maid Edith. All of this changes one evening when Charles invites a medium named Madame Arcati to the house to conduct a séance, as research for a new book he's writing. Charles and Ruth, along with their friends Dr. and Mrs Bradman whom they also invite to the séance, view the whole thing with skepticism, and struggle to hold back their laughter as Madame Arcati goes through her process of contacting the dead. After the business is finished, the party breaks up and everyone laughs at the amusement of the evening. Except for Charles, who has begun to hear and then see his late wife Elvira. Ruth believes her husband is ill or insane, until he convinces her of the reality of the ghost, when she becomes upset not just because there's a ghost in the house, but because Charles seems to enjoy being reunited with his former love. Ruth attempts to rid their lives of Elvira, but Elvira has plans of her own.*

This cast really couldn't be better, beginning with our own dear Sally Wingert, here at her zaniest as Madam Arcati, prancing and posing across the stage in search of communication with the other side. Guthrie newcomers Heidi Armbuster (who appeared briefly at the Guthrie in the mid-aughts) and Quinn Mattfeld as Ruth and Charles are the epitome of a perfectly charming mid-century couple, and are even more entertaining when at each other's throats. Bob Davis is a welcome sight as the good doctor George, and Amy Warner is delightfully dotty as his wife. Elia Monte-Brown is the perfect light, airy, and haunting ghost of Elvira. Last but not least, Guthrie favorite Suzanne Warmanen (who spent many Decembers in A Christmas Carol) steals scenes as the eager frazzled maid Edith. Even though this three-act play is close to three hours long, the cast and director David Ivers keep it clipping along at a good pace, with the energy and antics increasing throughout until the spectacular ending.

From my season subscriber seat in the front row of the proscenium theater, I had a beautiful shoe-level view of this stunning stage. Scenic designer Jo Winiarski has created a gorgeous and luxurious home in cool shades of blues and grays, with elegant furniture between a fireplace on one side and huge curtained French doors on the other. And without giving anything away, there is some theater magic that happens with the set that'll make your jaw drop. The costumes (designed by Meg Neville) are absolutely divine. I'm particularly enamored of every outfit that Ruth wears, from elegant gown to chic pajamas to super cute dresses that Stop Staring wishes they made (and so do I). But every character has a unique wardrobe, from Madame Arcati's eccentric looks appropriate for a bike-riding medium to the men's sharp suits. And my shoe-level view was quite rewarding.

Everything about this show is just yummy. It's pure and pleasant escapist entertainment, an exquisitely written and executed comedy. See the Guthrie website for more information and to purchase tickets.


*Plot summary borrowed from what I wrote about the 2015 production at Lyric Arts.