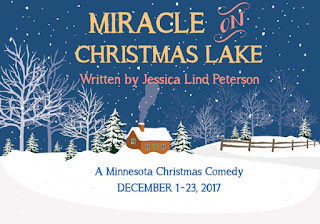 I'm a big fan of Yellow Tree Theatre in general and their four original and very Minnesotan Christmas* plays in particular (see also: A Gone Fishin' Christmas, no seriously go see it, playing now through the end of the year). So I jumped at the chance to see another theater company, Actors Theater of Minnesota, perform the play that started it all - A Miracle on Christmas Lake. Written by Yellow Tree co-founder Jessica Lind Peterson, it's inspired by the real life predicament they faced when they lost the rights to the show they were planning to do and had to come up with something in a short amount of time. This wacky, sweet, ridiculous little play chock full of Minnesota references and stereotypes was the result, and it's great fun to see another company's take on it in the intimate space of Camp Bar.

Quick plot summary (it's delightfully preposterous, so hang in there): Colin's father has died and left him a theater in the small Minnesota town of Christmas Lake (think snowcats and lutefisk and church basements). He has returned to his hometown with his wife Tess after leaving New York City and his successful career as a soap opera actor. At the last minute, the rights to their annual Christmas show, It's a Wonderful Life, are pulled, forcing them to come up with a new production overnight. The only actors they can get are the moon boot-wearing lizard-loving massage therapist Martha and the Little House on the Prairie-obsessed piano tuner Neil. They decide to stage a Christmas episode of Colin's soap As Time Ticks By to appeal to their greatest benefactor Mrs. Burlington. She's a big fan of the soap and Colin, and agrees to play a role in the show. Opening night arrives and everything falls apart, but in a so-bad-it's-good Producers sort of way. The show is a hit, the theater is saved, and Colin and Tess decide to stay in Christmas Lake and build the theater and their lives in this quirky little town they've come to love.**

Under the direction of John Haynes, the cast plays up the ridiculous humor of the situation, physically and verbally and with facial expressions. There are a few tender moments between Tess and Colin, but mostly it's a lot of over-the-top fun. Marci Lucht is great as always as Tess, very believable and natural as the fish out of water in this wacky town. Peyton Dixon is her loving husband Colin trying to live up to his father's legacy, and Charla Marie Bailey is pulls double duty as his mother and the eccentric hairy-moled Mrs. Burlington. Michael Ooms is a loveable goofball as Neil, and Siri Hellerman doesn't lose sight of Martha's humanity amidst her oddities. The cast has a great time, and I have to say, it's great to see some diversity in Christmas Lake.

Camp Bar has a tiny stage, but they make great use of the space and the fact that the play takes place on a theater stage, with entrances and exits through the audience. The stage has just enough touches to remind us that we were supposed to be in Bedford Falls, but made a quick change to the Sunset Valley-set soap (set design by Robin McIntyre). Costume designer Seri Johnson has dressed the cast in appropriate rural Minnesota gear, from typical to the extreme of Neil and Martha's get-ups.

If you're a fan of Jessica Lind Peterson's Christmas plays, or you can't get tickets to Yellow Tree this year, or you just don't feel like driving to Osseo, Actors Theater of Minnesota is doing a fine job bringing this sweet and wacky little Minnesota town to life on stage in St. Paul (continuing through December 23, in rep with The Comedy Roast of Mr. Scrooge).


*You can read about all of the holiday shows I've seen here.
**Plot summary borrowed from what I wrote about the 2013 production at Yellow Tree.