"The Terror Fantastic" by 20% Theatre Company at the Crane Theater 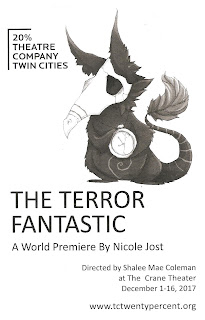 The new play The Terror Fantastic, about a young gay woman grappling with anxiety and depression, is indeed both terrifying and fantastical. In 20% Theatre Company's production, now playing at the Crane Theater, mental illness is represented by an ever-present monster, the only escape from which is into a fantasy world.

Last week the Twin Cities Theater Bloggers hosted a conversation about mental health and theater (which you can listen to here, along with the conversation about LGBTQIA in theater in which 20% Theatre artists participated). In that conversation I began to understand more about living with mental illness than I ever had before. This play adds another level to that, focusing on the fact that "members of the queer community experience anxiety and depression at rates 1.5-2.5 times higher than the rest of the population," but that "anxiety within this community, while debilitating, is also protective" (per a program note from director Shalee Mae Coleman). Fear can be a necessary and helpful emotion, especially when living in a world that doesn't accept you, but when the fear prevents you from living your life, perhaps it's not helpful anymore.

This idea is brought to life by Iz's story (played by Addison Sharpe), who writes erotic fiction under a pseudonym but rarely leaves her apartment. A couple of things escalate her anxiety - having a panic attack on the first day at a new job, despite an understanding boss (Khadija Siddiqui), and the arrival of college friend Floyd (Aaron Konigsmark), who tries to get her to go out and have fun. But Floyd doesn't realize that Iz has to be wary wherever she goes, and takes her protective anxiety monster (effectively embodied by Hillary Olson) with her. When Floyd's friend Sasha (Marcel Michelle) finds her secret writing and starts reading it aloud, Iz escapes into the fantasy world that she has created, a world that's populated with people from her life as the fantasy characters (a la The Wizard of Oz). But even in a fantasy world things go wrong, and Iz finds herself in a bad situation back in the real world, where she needs to learn to live with her fears but not let them control her.

The performance space at the Crane Theater is littered with moving boxes, that cleverly open as doors or cabinets (scenic design by Erica Zaffarano). The fantasy world is nicely represented by a warming of the light (designed by Courtney Schmitz) and projections of sweet scenes of castles or woods (designed by Daniel Mauleon).

The Terror Fantastic continues through December 16. While I did find it a bit weird and hard to follow at times, the cast gives it their all, and stories such as this about mental illness, particularly among the queer community, are not often told and need to be told.