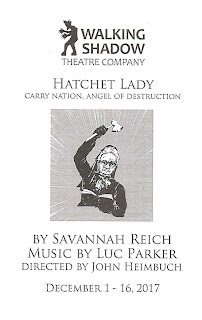 On a Wednesday night with a nearly full house at the parking-challenged Red Eye Theater, I saw a bizarre and possibly brilliant creation. Walking Shadow's new bio-musical Hatchet Lady about temperance activist Carrie Nation is in some ways neither a biography nor a musical. There is music and it is somewhat about Carrie Nation, but it doesn't follow the structure of any musical I've seen. And that's a good thing. I'm at a bit of a loss how to talk about this one, but if you're looking for music-theater storytelling that is outside of the norm, you might want to try to snag a ticket to one of the few remaining performances. Going into its 3rd and final weekend, it seems to have built up quite a following based on word-of-mouth that has transcended the usual theater crowd. It's a wild 70-minute ride.

If you want to know about Carrie Nation's life, read the Wikipedia page. The musical does tell us a little about her life - the death of her alcoholic first husband, her inspiration from God to destroy saloons with a hatchet. But it's also about a biographer named Frances who is writing what she thinks is another biography about a strong and interesting woman in history, when she gets stuck and has a bit of an existential crisis. Naive publishing intern Emily arrives at her door to help, and the two descend even further into the existential hole, aided by, ironically, alcohol. The story is a mash-up of scenes of Carrie in the past, Frances in the present, and a radio show that interviews them both, somehow. There's also a moment where Frances wanders through the audience talking about alcohol, and why we drink it, and what it does for us. It all feels very raw and almost unfinished, but in a good way.

Where does the music come in, you ask? There are a handful of songs, delivered by one of the characters standing at the front of the stage with a mic stand, like a rock concert sermon expressing their innermost feelings. Less like a traditional musical and more like a play with musical soliloquies. Even the staging is like a rock concert. Instead of sitting in Red Eye's riser seats, chairs are set up in a semi-circle in what is usually the performance space, with a small raised stage built at the back. This creates that intimate grungy rock concert feel that a traditional performance space wouldn't have.

Maren Ward gives an absolutely fearless performance as both Carrie and her biographer. She's so good in the role it's almost as if she wrote it herself. Which she didn't; the piece was commissioned by Walking Shadow from playwright Savannah Reich, based on her proposal in their Script Pitch Program, with music written by Luc Parker. But they found just the right cast to bring their creation to life. The other members of this all-female ensemble provide able support as multiple characters, both animal and human (accompanied by an awesome all-female four-piece onstage band). Maureen O'Malley is totally believable as Emily, Megan Burns is dryly funny as the MPR-like radio host (I only wish she got a solo too), and Chelsie Newhard charmingly/smarmingly sings a twangy song as Carrie's husband. Under director John Heimbuch they totally sell this almost campy show, but in a grounded and believable way.

Hatchet Lady continues through this Sunday only. It's weird and wacky and kinda wonderful, touching on issues of feminism, relationships, alcohol, activism, and finding one's passion. But does it really have to be about something? Maybe it just is, it's all its singular guts and glory.