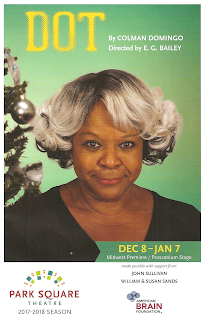 Park Square Theatre is getting into the #TCTheater holiday* show game, but the new play Dot is less of the sugar plums and figgy pudding variety and more of the juicy family dramedy variety. A family gathers at Christmas, adult children and friends come home, finding they have a lot of stuff to deal with. Chief among said stuff is that family matriarch Dotty has Alzheimer's, but everyone in the family has their own stuff going on too, just like life. This is a very real, grounded story of a family with issues (what family is without issues?), a family that loves each other and tries to do what's best, even if they don't know what that is. A fantastic cast under the direction of E.G. Bailey bring this smart, funny, poignant, relatable play to life.

When Dotty is diagnosed with Alzheimer's, daughter Shelly all but moves into the family home in West Philadelphia to care for her, despite the fact that she has a young son of her own at home, and a younger sister Averie living in her basement, having recently fallen from her short bout with celebrity that came with a viral YouTube video. Son Donnie and his husband Adam come home for the holidays from their busy life in NYC, and are dealing with a rough patch in their marriage. Neighbor Jackie also comes home from NYC, single, 40, pregnant, and still carrying a torch for her ex, Donnie. Rounding out this motley crew is Kazakhstani immigrant Fidel, whom Shelly has hired to help care for Dotty a few days a week. Shelly insists that the siblings make some plans about their mother's care, but they're in denial about the severity of the situation, until they see it for themselves.

Dot premiered just two years ago at the Humana Festival, and is written by Colman Domingo. Twin Cities and Broadway theater-goers might remember him from the original cast of Scottsboro Boys, which played at the Guthrie between its Off-Broadway and Broadway runs in 2010. Colman also returned to the Guthrie to perform a song from the show at the 2015 Gala celebration honoring departing Artistic Director Joe Dowling (where I had the pleasure of meeting him). But TV-watchers might also know Colman as Victor Strand from Fear the Walking Dead.** On top of his theater and TV performing talents, it turns out he's a great playwright too! Dot is a beautiful and messy depiction of a family; funny, irreverent, touching, and populated with very real characters who sometimes talk over each other like real people do. There's no resolution to this story, no definitive ending, just people continuing to deal with life the best they can.

NYC based actor Yvette Ganier stepped into the pivotal role of Shelly a week or so prior to beginning performances; an amazing feat, and you would never know it. She's totally in the story and feels right at home admidst the cast who's been working with the piece much longer than she has. Cynthia Jones-Taylor is wonderful as the title character, at times full of verve and vigor, at other times completely vacant as the dementia sets in. Ricardo Beaird and Michael Hanna are both funny and charming as the couple Donnie and Adam, and Dame-Jasmine Hughes makes an impression as the attention-grabbing youngest sibling. Anna Letts Lakin is sympathetic as neighbor Jackie, and Maxwell Collyard is a calm and sweet presence as Fidel. The whole cast really gels and feels like a family, with great chemistry.

Scenic designer Andrea Heilman has created not one but two realistic and lived in sets. I missed the intermission scene change, but I gather that the massive set was rotated - one side is a kitchen so welcoming I wanted to make myself a cup of coffee and pull up a stool at the island, and the other is a warm and cozy living room with a huge decorate Christmas tree. Whether the kitchen in Act I or the living room in Act II, there is a sense of things unseen (but sometimes heard) going on in the other room. The storytelling continues even through the scene transitions as actors move through the space in character, doing chores or getting a snack.

If you would like a taste of real-life family drama this holiday season, that feels familiar but is likely more entertaining than your own, spend a few hours with the Shealy family in West Philly via downtown St. Paul (continuing through January 7).


*You can read about all of the holiday shows I've seen here.
**Fans of the Walking Dead franchise take note: this is not your only chance to see a play written by a zombie-killing actor. The play Familiar written by The Walking Dead's Michonne, Denai Gurira, will be produced at the Guthrie next year.