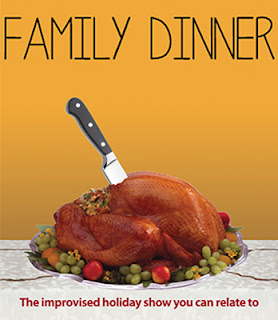 It's been too long since I've enjoyed some improv at HUGE Theater in Uptown. But thanks to the appeal of the annual hit Family Dinner, I made a visit last weekend. And since I was there, I also stayed for the 9:30 show (I'm afraid a 10:30 show is more than this morning person can do, sorry improv-ers). Family Dinner has Friday and Saturday performances for the next two weekends but is virtually sold out. But the other show I caught, The Mess, performs Saturday nights and is also a great option. In fact, just about every night there is something funny going on at HUGE, so check it out sometime to experience something outside of the usual #TCTheater world.

Family Dinner
The premise is simple: various family members and friends gather for a holiday* dinner. To add to the fun, the audience suggests secrets that each actor is assigned, secrets like "you live out of your car," "you've just been disbarred," or "you hit something with your car on the way here," secrets that the actors can choose to use in any way they wish throughout the course of the 75-minute show. And then they're off!

The cast rotates with each performance, and I was treated to the talents of Anna Tobin, Emily Townswick, Jake Scott, Jen Scott, Matt Prindle, Rita Boersma, and Sam Landman. A couple with a baby (played by a real life human baby!) host a Christmas dinner, with guests including his brother and wife, her sister and new boyfriend, and a random coworker. In Act I we watch scenes with a few of the cast members, as they prepare for the dinner, arrive and greet each other, and make awkward small talk over drinks. Then, in Act II, we get to the actual dinner, when the entire casts sits down at a table and eats actual food while continuing with the stories they set up in Act I. All impossibly improvised!

I believe this is what they call long-form improv, in which a scenario is set up and continues for, in this case, 75 minutes. It was such fun to watch these seven talented actors develop their characters throughout the show, building on each other, spilling these absurd secrets, and just having a great and awkward time at dinner. It takes a special kind of talent to react to what's happening, unscripted, and be funny and make sense (mostly) within the context of the larger story. It takes a lot of listening, and a lot of being present in the moment. I noticed some of the actors taking notes while not in a scene, perhaps a memory aid for important facts and names. I'm not sure what, if anything, was planned before the show or during intermission (names? relationships?), but it's great fun to watch, and leads to all sorts of unexpected and hilarious situations and lines. 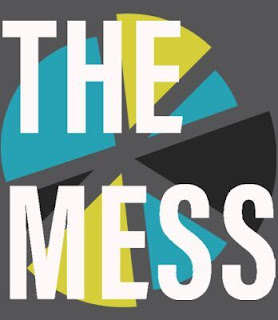 The second show of the night featured short-form improv, in which scenes last from a few seconds to a few minutes. The cast of The Mess overlapped a bit with Family Dinner (Eric Knobel, Jake Scott, James Rone, Michael Ritchie, Mike Fotis, and Rita Boersma), but different skills are required. This one moves fast, with scenes spinning off of each other at a moment's notice, and everyone just goes with it. I'm not entirely clear on the rules of the game, but it seems to have something to do with the dimming of the lights, or someone new walking into the scene. A different kind of fun than the first show, but still fun to watch where their minds go and the recurring themes that they circle back to.

Visit the HUGE Theater website to see the schedule of what's happening. If you can put up with the annoyance that is parking in Uptown, improv at HUGE is a fun alternative to the usual theater fare, requiring some of the same but different skills. And it's reasonably priced, most shows are $10 or less with deals for Flex Passes to see all shows on one night.