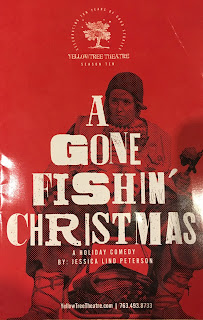 The #TCTheater holiday* season is not complete without a visit to charming downtown Osseo, adorned with red, green, blue, and white lights on all the trees lining the main street of this small town in the suburbs. Just a few blocks away, tucked in a nondescript strip mall, is the warm and welcoming Yellow Tree Theatre space, where for the 10th year in a row you can experience an original Minnesota holiday play, a silly comedy mixed with local references, and a heartfelt message of home and community underneath it all. YTT co-founder Jessica Lind Peterson has written four such plays - two installments of Miracle on Christmas Lake,** A Hunting Shack Christmas, and this year's selection, a reprise of last year's smash hit A Gone Fishin' Christmas. They've brought back most of the original cast, plus a few fun additions, and if possible it's even better than it was last year. It's a really fun feel-good show, with outrageous hilarity mixed with tender moments, plus an original song by Blake Thomas! The Wednesday performance I attended was not sold out, but tickets will get harder to come by, especially weekends, as the season continues, so make your plans now to visit the ice house before it's too late (more info here).

The central conflict of this play is between two sisters from Duluth (from whence, coincidentally, the playwright also hails). Cassie couldn't wait to leave town as soon as she finished high school (as seen in a couple of flashbacks, charmingly labeled so by a sign that pops out of the hole in the ice) and is now a TV news reporter in the Twin Cities. She returns to Duluth, green intern Misha in tow, to cover a story on the Christmas ice fishing competition. Scheduled to interview her father who's supposed to be competing in the contest, she shows up at the family icehouse on Lake Superior to find him out of town and her sister Katie there instead. The two sisters could not be more different; Katie has, let's say, embraced her natural earthy side, retreating into the culture of the place they grew up in as much as Cassie has run from it. Decades of family tension fill the air, and the drama builds as Cassie's ex Eric, who has stayed in town to run his dad's bar, unexpectedly shows up. A sudden shift in the ice sends the icehouse and the little group inside floating free on the big lake, until Coast Guard (and Katie's crush) Anders stages a brave rescue. Trapped on a floating island of ice, fishing gear, and memories, Cassie is forced to reconnect with what she's been running away from for years - her past, her family, her hometown, her ex, her self.***

The beauty of Yellow Tree's intimate theater space is that it becomes almost immersive; you're totally in it with the cast and the rest of the audience for the shared experience of live theater. In this small space you can clearly see the emotions on the faces of the actors, so close that at times it seems like they're in danger of falling off the stage and into your lap. The set looks so real and detailed you're tempted to climb on up and explore. Being a citiot myself, I've never actually been in an icehouse, but this is what I imagine one would look like (only less claustrophobic). The elevated stage is the ice, with a fishing hole cut into it from which various objects (and people) emerge and disappear. Fishing gear and other interesting details cover the back wall and are strewn around the surface of the ice. Costumes range from the chic city wardrobe to plaid shirts to Katie's furry native-inspired gear (set design by Katie Phillips, costume design by Morgan Potter).***

Everyone in the five-person cast (two of whom are based in Duluth) is so playful and fun to watch as they bring out the quirkiness and the humanity of their characters. Director Jason Peterson strikes the perfect balance between the silly and the serious; often just at the most touching moment when the tears begin to fill your eyes something happens to make you laugh out loud, the most delicious mix of emotions. The returning cast members are if possible even more comfortable with their roles, allowing them to be more playful and find more depth. Mary Fox is a riot as Katie (or as overheard in the bathroom line, "that Mary Fox is something else!"), and Matt Wall is committed in the quirkiness of Anders. Zachary Stofer is a charmer as Eric, the one that got away (and not a little Hopper-like). Taking over the role of Cassie this year is Tara Borman, alternating with the playwright. I was lucky enough to see a performance with Jessica, and it's fun to watch her perform in her own play that is obviously based on her life and experiences, if not literally, at least in the love of her hometown and family. Brand new to the show this year is Gracie Anderson, who not only can sing like Patsy Cline, but can also rap and do the silly humor required of Misha (a role played by a man last year, BTW).

What else is there to say? If you love Minnesota (and Duluth) references, physical comedy (including some awesome slow-mo fight scenes and people falling in holes), bittersweet romance, family drama, and music that makes your heart ache, head to charming downtown Osseo between now and the end of the year to spend a few hours (or less, actual running time well under two hours with intermission) in an ice house with these delightfully wacky characters.


*You can read about all of the holiday shows I've seen here.
**Miracle on Christmas Lake is being produced this year by Actors Theater of Minnesota at Camp Bar in St. Paul (more info here).
***Much of this post is borrowed from what I wrote about what I wrote about last year's show.