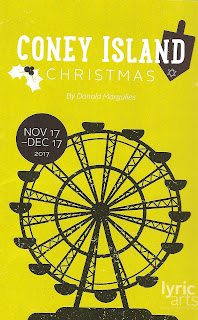 Next up on the #TCTheater Holiday Tour* is Lyric Arts' lovely little gem of a play, Coney Island Christmas. Clocking in at just 80 minutes, Coney Island Christmas manages to create that warm and wistful feeling of nostalgia, while making a plea for all of us to respect each other's traditions, even (or especially) if they're different from ours. A highly entertaining cast of children and grown-ups, a heart-warming message of community, and some of the best worst carol singing you've ever heard make this a lovely addition to the holiday theater season.

I couldn't help but think of The Princess Bride as the play opened - a great-grandma goes to visit her sick great-granddaughter and tells her a story. But this isn't a fantastical story of heroes and princesses and giants, it's a true story of grandma Shirley and her family when she was a little girl in Brooklyn in the '30s. As Shirley tells the story to young Clara, they get out of bed and walk amidst the story, a la A Christmas Carol. Young Shirley is a precocious and vocal child who makes her stage debut in the Thanksgiving play. Shirley's father is proud as can be, but her mother doesn't understand the appeal of dressing up and pretending to be someone you're not. When Shirley is chosen to play Jesus in the Christmas play, her mother tells her she can't do it, understandably wanting Shirley to stay true to her own Jewish traditions. But all Shirley wants is a chance to use her loud voice, and convinces her doting dad to give her permission behind her mother's back. But you know she's going to find out, because there wouldn't be a story if she didn't. In the end, Shirley's mom decides that she's happy she's raising a daughter who knows who she is and how to use her voice.

Director Elena Giannetti keeps the story flowing smoothly through space and time, and sets just the right tone of humor, heart, and nostalgia without being too schmaltzy. Mary Cutler is a wonderful guide and narrator in grandma Shirley, and also gets to step into the story play a neighborhood woman. Gabriella Rosen is sweet and open as Clara, a typical modern child. Lily Wangerin is charming and natural as young Shirley, while Anthony R. Johnson and Shana Eisenberg are both wonderful as her parents. The entire ensemble is great, especially when they perform the worst Christmas pageant ever. Is there anything funnier than adults pretending to be awkward kids? Especially scene-stealer Zach Hays as the awkwardest kid, singing too loudly and just a beat too slow.

The show opens with an empty stage, save for a modern child's bed. As we're transported back to 1935 Brooklyn, a charming city skyline comes into view, along with Shirley's father's store filled with goods, and the small but warm family apartment above it. It's a cozy and realistic representation of Shirley's multicultural and close Brooklyn neighborhood (scenic design by Leezah Behrens).

While the play has a lovely message of tolerance and acceptance of cultural differences, I do wish that it weren't the Jewish family that has to learn to accept other traditions (although the good news is Shirley didn't forget her own traditions, and still celebrates Hanukkah with her great-granddaughter). Perhaps people in the dominant culture (i.e., Christianity) are the ones that need to learn about and accept other traditions than their own. But the majority of the audience for this play is probably Christian, and hopefully they'll go away thinking not, "see, Jews can celebrate Christmas too," but rather, "other cultures celebrate different holidays that are just as worthy as mine, and shouldn't be forced to celebrate the same traditions as the dominant culture."

Coney Island Christmas continues through December 17, but it's not the only holiday show at Lyric Arts this year. They're doing double duty this holiday season; Forever Plaid: Plaid Tidings opens on November 30 and the two shows run in rep into December.