"Finding Neverland" on tour at the Orpheum Theatre 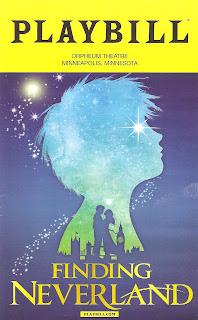 Based on the 2004 movie Finding Neverland, which was in turn based on the 1998 play The Man Who Would be Peter Pan, the 2015 Broadway musical Finding Neverland, now playing at the Orpheum Theatre, is not what one would call an original musical. Although based on the life J.M. Barrie, the author and playwright who created Peter Pan, the characters and plotlines are not particularly original either, with cliched relationships and predictable plot turns. But don't worry, there's a but. Even if it's not the most original musical you'll see, it's still quite delightful in execution. I had never heard the score before, and found parts of it quite lovely. The design is magical, the movement and choreography is innovative and interesting, and this touring cast (including children and a dog) is wonderful. As long as you're not expecting anything too deep or original, Finding Neverland is sure to delight, at least in some moments, and has an inspiring message about the power of imagination, which is what theater is all about.

In this fictionalized account of J.M. Barrie's life, as in his real life, James' friendship with a family of young boys inspired him to create the character of Peter Pan, a boy who never grows up. But since this is a musical, there has to be inner conflict (James is feeling uninspired writing versions of the same play over and over again), drama (James' theater producer demanding a new play), romance (James and the boys' mother Sylvia fall in love), tragedy (Sylvia dies of the mysterious illness that often befalls pretty people in musicals and movies), and triumph (James becomes father to the boys and they all live happily ever after).

All elements of design combine to create some pretty powerful theater magic, in a Mary Poppins-esque sort of way. Painted backdrops roll in and out, depicting the city of London, Kensington park, and the theater backstage. Moving images are at times projected onto the backdrops, creating new worlds and heightening the sense of fantasy. When James imagines himself inside the world of Peter Pan, a ship's mast and ropes appear out of nowhere. The choreography is also quite magical, modern yet not incongruous with the time period of the story. The cast moves around the stage with energy in a way that's imaginative and fun to watch. Yet one of my favorite moments was a quieter one, the James/Sylvia duet characterized by small subtle flowing movements and shadow-play on the wall. And the moment of Sylvia's death is quite stunning, so much so that my blogger friends and I wish the show had ended right there. (Credits: Scott Pask scenic design, Suttirat Anne Larlarb costume design, Kenneth Posner lighting design, Mia Michaels choreography, Diane Paulus director.)

The lanky and nimble Billy Harrigan Tighe is a charmer as James, with a truly lovely voice. Lael Van Keuren has just recently taken over the role of Sylvia, but you'd never know it, as poised and perfect in the role as she is. The four boys (played by six child actors on rotation) are truly talented little people. Kristine Reese (real life wife of Billy, BTW) is strong in the underdeveloped role of James' wife (I don't see her as the bad guy as much as the musical seems to want me to), Karen Murphy is a hoot as the boys' grandma, and John Davidson (yes that John Davidson, game show guru from the '80s and '90s) is a major scene-stealer as both James' tough-talking American producer (think Jack Palance) and the Captain Hook of James' imagination. Many ensemble members have great moments in characters ranging from servants to actors. Last but not least, the cast includes the best acting, most obedient dog that looks like a big stuffed animal toy. Who doesn't love a dog doing tricks on stage?!

The magic of Finding Neverland continues at the Orpheum Theatre in Minneapolis through November 5 only. Click here for more info and to purchase tickets (student/educator rush tickets also available).