"And Then There Were None" at Theater in the Round 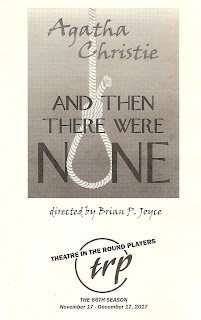 And Then There Were None is the best-selling novel by one of the world's most popular mystery writers, Agatha Christie. If one can overlook the horribly offensive original title and the song from which it came (which, to be honest, I'm not sure one can), it's a suspenseful and gripping tale of the most deadly game of Survivor. Christie herself adapted the story into a stage play, even changing the ending. I'd never seen or read it, and I love a good mystery play, so I found Theatre in the Round's production to be an entertaining and surprising afternoon at the theater.

The entire story takes place on an island off the coast of England, where eight guests (played by Cate Jackson, Corey DiNardo, David F. Dubin, Jeff Altier, Jôher Coleman, Kari Elizabeth Godfrey, Rick Lamers, and Ryan D. Maddux) are delivered by the daily boat driven by a man named Narracott (Colin Koll Healey), the only contact with the mainland. The arrive to find their hosts absent, and only a couple of servants (Andrew Troth and Lois Estell) to greet them. After some introductions, small talk, and more than a few drinks, a recording is played that accuses all ten current residents of the island of murder, with names and details. It soon comes out that none of them actually know the hosts and were invited under false pretenses. They all have some excuse to explain away the accusation, but it isn't long before one of the ten drops dead, and one of the ten soldier figurines is broken. By intermission we're down to only seven left, seeming to follow the lines of the poem printed in the living room. As more and more people get voted off the island, so to speak, the remaining survivors begin to suspect each other until, as the title says, none are left. Or are they? There's a twist at the end that I didn't see coming, which is the best kind of mystery. 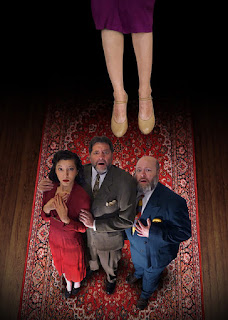 The entire cast works well together under director Brian Joyce, and all speak with charming English accents. As each one dropped I had a thought of, "aw, I liked them." But I have to say, seeing this play sandwiched between two other English period plays* that had diverse casts, perhaps not "historically accurate" but more inclusive and representative of the world we live in, the lack of diversity in this cast is disappointing. I would love to see Theatre in the Round be more thoughtful about their casting, to better represent the Minneapolis neighborhood in which it resides, and the Twin Cities community in general.

The design of the play works well in the in-the-round space, with stately furniture placed around the circular performance space in a way that allows for movement and good viewing from all angles. As each person meets their end, one of the ten little soldier boy figurines is broken or disappears, and as much as I tried to keep my eye on them, most of the time I could tell when or how it happened. A bit of theater magic and distraction makes it happen (set design by Philip Hoks and prop design by Robert J. Smith).

And Then There Were None is a classic mystery, and is sure to please mystery lovers. I'm glad I finally saw it, and it did have me on the edge of my seat on several occasions, but more diverse casting would have made it feel fresher and more relevant. Continuing through December 17.

*For excellent examples of color-conscious casting to create a more inclusive and representative world on stage, see the Jungle's Miss Bennet: Christmas at Pemberley and the Guthrie's A Christmas Carol.