"Waitress" on tour at the Orpheum Theatre 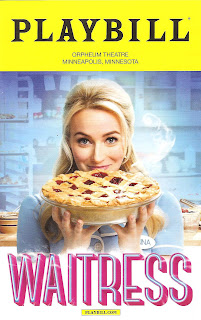 Just in time for Thanksgiving, the Broadway musical about a woman who bakes amazing pies rolls into Minneapolis. Based on the 2007 indie movie Waitress (written and directed by Adrienne Shelly, who was tragically murdered before it was released), the musical (also written by women - book by Jessie Nelson, music and lyrics by singer/songwriter Sara Bareilles, who also took a turn in the lead role for a few months) received several Tony nominations in 2016 and is still running on Broadway. This is a movie I loved so much I bought the DVD (back when people watched DVDs), and similar to a movie I love even more, Once, the creative team has done just about as good a job as possible turning it into a musical. The musical is much more comic and light-hearted, and doesn't have as much of the beautiful sadness of the film, but it's hard to do subtle emotions on a Broadway stage. I find it to be a successful adaptation with a fantastic score, modern and interesting choreography, and this touring cast really beautifully brings it to life.

Although I own the DVD of the movie Waitress, I haven't watched it in years. I watched it again over the weekend, and found that I still love the charming, funny, sweet, and sad story of waitress and pie-maker Jenna. She's trapped in her life - by poverty, a controlling and abusive husband, and no options. Her solace is baking pies at Joe's Pie Diner with friends Dawn and Becky (as much as anything else, this is a story of female friendship). When she finds her self unexpectedly pregnant, Jenna doesn't have much hope for her future or her child. She hides money around the house, and dreams of entering a pie contest, hoping to be able to leave Earl someday (is it a coincidence that Jenna's abusive husband shares the same name as the abusive husband in the Dixie Chicks' empowerment anthem "Goodbye Earl?"). But Earl finds out, and won't let her leave (the musical cleverly turns what could be a romantic song, "Til the sun don't shine, you will still be mine," into a threat, a cage, a trap). Jenna also begins to find solace in her relationship with her doctor as they begin a secret affair. Eventually Jenna gains the courage to start her life anew, thanks to her friends, an affair with this man who is kind to her, and her new baby Lulu.

The musical stays very close to the movie, even including some lines and scenes verbatim. Some things are combined, some locations moved, but this is a very faithful adaptation of Adrienne Shelly's original story. I've heard the musical described as "a fun celebration of love and laughter." That's not exactly what I think of when it comes to a story of an abusive relationship, poverty and hopelessness, an unwanted pregnancy, and extra-marital affairs. The movie is a bittersweet story of joy in the midst of hardship, and the musical skews the ratio of bitter to sweet more towards the latter. They play up the comedy and the gimmicks, and characters are portrayed in broad, over-the-top ways. All of this works, and it's great, and fun, and plays well to an audience used to seeing Big Broadway Shows. But I would love to see this small intimate story told in a smaller and more intimate way. I'm looking forward to when Waitress is available for regional production, and a theater like Theater Latte Da can do it in a more organic, stripped down way with some lovely and subtle characterizations, maybe incorporating the band into the ensemble.

That being said, they really do some inventive and interesting things with the ensemble, and the six-person band is on a platform that's rolled onto stage for most of the show, which I love. And since we're talking about women's stories, it should be noted that the majority of the band are women, led by a female conductor (Jenny Cartney), which I also love. The ensemble is present in most of the scenes, providing harmony, movement, and clapping. The choreography (by Lorin Latarro) is modern and interesting and more about meaningful movements that showy dance moves, which really suits the story. This hard-working six-person ensemble, who also play multiple characters, really add depth to the world of the story.

The leads are all wonderful too, beginning with Desi Oakley as our Jenna. With a strong, clear, melodious voice, she embodies the reluctant and humble heroine and is easy to root for. Charity Angel Dawson and Lenne Klingaman (who appeared at the Jungle in their all-female Two Gentleman of Verona last year) are also terrific as the very different friends Becky and Dawn, and the three form a strong trio (both vocally and friendship-wise). Bryan Fenkart is charmingly awkward as Dr. Pomatter, Nick Bailey is appropriately scary as Earl, Ryan G. Dunkin is tough-talking softie Cal, Larry Marshall is perfectly sweet and curmudgeonly as pie diner owner Joe, and last but not least, Jeremy Morse steals scenes every which way he can as Dawn's adorably geeky love interest. And as a special treat, the role of little Lulu (who appears in the final scene only) is locally cast in each tour stop, and here in Minneaoplis is played alternately by Prewitt Anderson and Estela Antivilo. I saw the former, and although only 5 years old and up way past her bedtime, she hit every mark and said every line clearly and stole every heart in the theater.

I started listening to the score a few weeks ago and it's really grown on me. I don't typically listen to musical theater scores when I haven't seen the show, because without knowing the story and characters it just doesn't mean much to me. But after repeated listening, re-watching the movie, and seeing the musical, I'm quite sure it's going to become a favorite. Sara Bareilles has written a clever and catchy score, with interesting melodies, humorous and/or poignant lyrics, and some gorgeous harmonies, particularly for the trio of Jenna, Becky, and Dawn. It's more of a folky/retro sound than you might typically hear on Broadway, with just a six-person band, and includes soaring ballads (the show-stopper "She Used to be Mine"), funny little ditties ("Club Knocked Up" and "Never Ever Getting Rid of Me"), and lovely duets ("You Matter to Me").

The scenic design is also lovely and beautifully represents the small town Americana feel, with a backdrop of open skies and cute and kitschy set pieces that roll in and out for the diner, clinic, and home scenes (scenic design by Scott Pask). They also have real baking ingredients on stage, or what looks real from 15 rows back. Sugar, butter, and flour flow freely and are part of the choreography. The pie theme continues out into the lobby, where they sell overpriced but delicious novelty pies in mini mason jars (technically apple crisp and a chocolate caramel trifle).

There are no performances on Thanksgiving day itself, but with two shows per day Friday through Sunday, plus tonight, you still have a chance to enjoy the magic of pie, music, and storytelling this holiday weekend (more info, showtimes, and tickets available here).