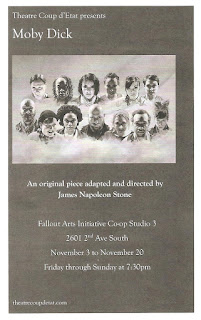 "Call me Ishmael." Even thought I've never read Herman Melville's novel Moby Dick, one of the most well known and well respected American novels, this line that opens the book was familiar to me. And so it was a certain kind of thrill to hear the line spoken Monday night in a small art studio space in South Minneapolis, my first experience with this epic tale. Theatre Coup d'Etat's Artistic Director James Napoleon Stone adapted the novel into a two and a half hour play and directs this production, with a terrific 13-person cast, a cool found space, interesting movement, and lovely musical accompaniment. The result is an epic yet intimate telling of this classic American story.

As in the novel, the story is narrated by the sailor Ishmael, who joins a whaling ship captained by a man named Ahab. But unlike the novel, our Ishmael is a woman. In fact over half of these characters (presumably all originally male, since this is a 19th century whaling ship) are played by women and often referred to as such, and the cast is ethnically diverse as well. For anyone who complains that non-traditional casting is "not historically accurate," take note - this is how it's done. The characters are still the characters, the story is still the same, and we very quickly forget about race and gender as we get swept up in the story. A story that is now more inclusive of more people in the audience, feels more modern, and may take on some some extra relevance based on the people telling it.

I'm not going to go over the plot, you can read about it here, although it has been condensed from its original form. Suffice it to say that Captain Ahab is missing a leg due to an encounter with a white whale named Moby Dick, and will sacrifice anything to get his revenge and kill the whale. Storms, encounters with other ships, whales caught and missed, and crew members lost all culminate in the climactic ending, with only Ishmael left to tell the tale of friendship, camaraderie, and obsession.

The cast all create specific characters with different accents from around the world, some of which are a bit hard to understand at times, but stick with it. Highlights include Eva Gemlo, who gives Ishmael an Arya Stark-like quality that makes you want her to succeed; Adam Scarpello as a fierce, admirable, and frustrating Captain Ahab; Kayla McCarthy as the noble first mate Starbuck; Antonia Perez as the tough and mysterious Queequeg; and Meagan Kedrowski and Craig James Hostetler as amiable buddies Stubb and Flask.

The entire ensemble works well together, using movement to become the whales and the waves at times. The performance space has a balcony that's well utilized, accessed by a stairway and ladder, with ropes and other maritime accouterments being tossed up and down. I became quite fascinating with watching the crew members tie knots, move (seemingly) heavy crates, and toss harpoons with well choreographed timing. The crew often breaks into sailor songs, accompanied by a four-piece onstage band consisting of strings, flute, and bodhrán (Irish drum). Directed by Jamie White Jachimiec on cello, the band performs with a lovely and haunting Irish flair that makes the story come alive.

This inventive, modern, and fresh retelling of the classic Moby Dick continues Friday through Monday evenings for the next two weekends at Fallout Arts Initiative Co-op Studios on the corner of 26th Street and 2nd Avenue in Minneapolis (street parking available).