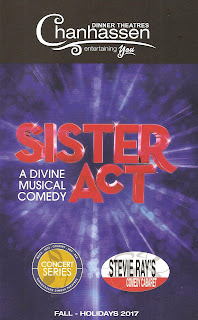 Amazing things can happen when women stand together and raise their voices, something we've witnessed recently with all of the sexual harassment and assault experiences that have been coming forward. On the musical theater front, when the women standing together are some of the most talented in #TCTheater, and they're raising their voices in the joyous musical adaptation of the movie Sister Act, it's a very amazing thing. Chanhassen Dinner Theatres is bringing back their smash hit from 2015 with mostly the same cast, but while the show might be the same, the world is a much different place than it was two years ago. This beautiful story of sisterhood, friendship, community, and standing up together and raising your voices for joy, love, and faith, may be needed more now than it ever was.


Last time I gave you ten reasons to see Sister Act, and they still apply, so I'll share them again (with some minor modifications):