"Based On / A True Story: Two New Plays" by Raw Sugar and Theatre Corrobora at Southern Theater 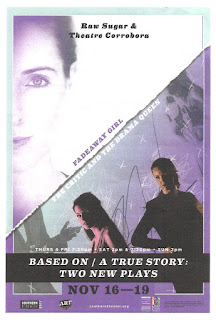 At the Southern Theater this weekend, you can see two new one-act plays, both very much worth seeing. They're very different plays, but what they have in common is that they're written and performed by women, telling their own personal, authentic stories. Produced by two companies whose work I want to support based on their mission ("Raw Sugar creates imaginative, adventurous productions led by feminists" and "Theatre Corrobora is a group of young artists who strive to create meaningful, challenging, and intelligent works of original theater by and about young women"), Fadeaway Girl and The Critic and the Drama Queen are both funny, thoughtful, and engaging new plays, and you should go see them (five performances this weekend only!).

Fadeaway Girl
Fringe favorite Rachel Petrie presents perhaps her most personal work, a one-woman show about living with mental illness* (directed by Keely Wolter). Constructed as a series of vignettes about topics such as her stay in a psych ward, when to tell a date about your mental illness, the benefits of therapy (when you find the right therapist), and her fear of walking over bridges, Fadeaway Girl is as entertaining as it is insightful into the life of one person living with mental illness. While it seems to be changing lately, there is still a stigma associated with mental illness and a discomfort in talking about it, but Rachel is so open about it, and tells her stories in such funny and real ways, that it doesn't feel uncomfortable at all. Sobering at times, yes, but Rachel is so charming and disarming in her storytelling that it feels perfectly natural. With movement, costume changes, a great selection of songs, and photo and video projection, the play is very effective in making mental illness more understandable and less scary.

The Critic and the Drama Queen
Written by Hailey Colwell (see also the Fringe shows Girlhood and It Always Rained in Paris), this play tells a fictionalized version of her friendship with actor Aidan Jhane Gallivan, with both women playing themselves (or a version of themselves). In addition to being a playwright, Hailey is the Critic of the title (in real life she writes for Minnesota Playlist) and Aidan is the Drama Queen (in real life she recently appeared in TRP's excellent A View from the Bridge). In the play, there is tension in the friendship due to the fact they both love theater, which is how they became friends in high school, but they're involved in different ways. Hailey accuses Aidan of always wanting to be the center of attention, and Aidan accuses Hailey of sitting safely at home not aware of the effect of her words (as someone who writes about theater, I found the discussion of theater criticism very interesting and relatable). There was a bit of meta pre- and post-show activity that really made you feel like you were spying on these women in their friendship. In the play, their disagreements tore the friendship apart, but the real life friendship seems to be very strong and productive.

One other thing the two plays have in common is musical accompaniment by John Hilsen on keyboard, and both plays feature singing, although neither is a musical. Rachel sings a beautiful and inspirational song to close the play, while The Critic and the Drama Queen has a running musical soundtrack, plus one duet. Both plays are very thoughtful with attention paid to every detail of design.

Fadeaway Girl and The Critic and the Drama Queen play this weekend only at the Southern Theater. Don't miss your chance to support new works by women telling their own stories. That's something we definitely need more of in the world. For more information see the Facebook event page, and to purchase tickets visit the Southern's website.

*For more on dealing with mental illness and mental health in theater, please attend the Twin Cities Theater Blogger's upcoming conversation, at which Rachel will be a panelist. The event is free of charge, with no reservation necessary, to be held at Park Square Theatre on Monday November 27 at 7 pm (more info on the Facebook event page here).