"A View from the Bridge" at Theatre in the Round 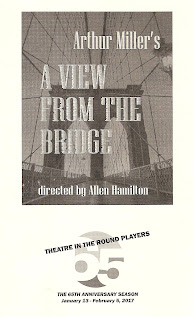 If you're a fan of American theater classics, get yourself to Theatre in the Round (which happens to be the longest running theater in town) in the West Bank neighborhood of Minneapolis. Their excellent production of Arthur Miller's A View From the Bridge features strong performances from the whole cast (particularly the leads), a really cool set with vintage props, and great staging in their intimate in-the-round setting. This completely engrossing and tragic story of flawed and very real characters navigating hard times and tricky family relations in 1950s working class Brooklyn will get under your skin. It's one of those experiences that makes you feel like you've been on a journey with these characters, one that's hard to shake when you leave the theater. It's probably the second best play I've seen at TRP (the best being the gorgeous production of Tennessee Williams' Summer and Smoke in 2012). Don't let this one fly under your radar.

This is the third Arthur Miller play I've seen in the last few months (see also Yellow Tree Theatre's devastating Death of a Salesman and Theatre Coup d'Etat's site-specific and eerily relevant The Crucible). He definitely had a knack for writing these tragic flawed characters, but filled with such humanity that your heart breaks for them. A View from the Bridge centers on an Italian American family: hardworking longshoreman Eddie and his equally hardworking wife Bea, raising her sister's niece Catherine in their modest Brooklyn home. Eddie loves Catherine and wants her to have a better life, but his love verges on obsession, and he's jealous and suspicous of every opportunity (or man) who might take her away from him. Enter Bea's Italian cousins, smuggled into the country to work on the docks so they can send money home to their family. Marco thinks only of his wife and children in Italiy, while young and single Rodolpho enjoys the pleasures of America, including Catherine's company (while much is made of the possible incest between Eddie and Catherine, who aren't blood related, no one seems bothered by the idea of Catherine marrying her cousin - I guess he's a distant cousin).

When Catherine tells Eddie she and Roldolpho are going to get married, he is heart-broken. He accuses Rodolpho of only marrying Catherine to stay in the country, and of being a homosexual (in 1950s language, "not right," ouch). But there's nothing he can do to stop them, and nothing we can do to stop the tragedy unfolding before us. Except enjoy the painfully delicious realness of it. Miller uses the character of Alfieri, the lawyer Eddie consults to help him thwart the relationship, as a narrator. He frames the scenes, adding a sense of forboding as he speaks regretfully of what he witnessed. We know from the beginning there's no happy ending for Eddie, but that doesn't make it any less shocking when it happens.

Director Allen Hamilton has cast this play well, and gets strong performances out of everyone, but I'm particularly enamored of the central family unit. Aidan Jhane Gallivan is sweet and lovely as Catherine, making it easy to see why Eddie loves her so, but you also feel her pain and confusion when that love turns darker. Roberta Gibbons' Beatrice is tough and loving in that Italian mother kind of way, but she's no fool. She sees what's happening before anyone else does. Michael Egan simply transforms into Eddie. He has the look, the accent, the physicality, the emotions, the expressions (his face just absolutely crumples in despair in a way that's heart-breaking to watch) - I believed he was this guy. The strong supporting cast includes the always wonderful David Carey as Alfieri, our strong and warm guide through this tragedy; Don Maloney as the quiet and hard-working Marco, who turns tough when his family is threatened; and Derek Dirlam as the charming playboy Rodolpho.

I'm not expert on accents, but to me all of the accents, especially the Brooklyn accents, sound authentic and really help create a sense of place for the story (kudos to dialect coach Carolyn Strauss). Most of the scenes take place in and just outside the family home. To solve this in-the-round challenge, set designer Toni Solie has built an elevated platform with short walls delineating the home, but still allowing sightlines from all areas of the theater to the scenes on all areas of the stage. The home looks every bit the shabby but well cared for apartment, and is filled with vintage records, magazines, and tchotchkes, including Christmas decorations which I swear included Jesus in Santa's sleigh. The titular bridge can be seen silhouetted in shadows on the wall, and Carolanne Winther's period working class costumes look authentic and detailed, down to the seam on the nylons.

A View From the Bridge continues through February 5. If you're looking for a well-directed, -acted, and -designed production of a classic American tragedy in an intimate setting - this is it.