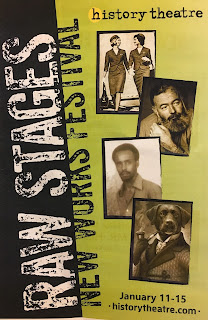 One of the wonderful things about the Twin Cities theater scene is that we get to experience new works of theater while still in the development process. The Playwrights' Center is dedicated to that, and you can often catch a free reading of a new and exciting play (like queens earlier this week). Many theaters in town have their own play development process, and an important step in that process is sharing the piece with the audience. And I can't think of a theater more committed to developing and producing new work than the History Theatre. Most of the plays in their regular season are new works developed, and sometimes commissioned, by the theater, and many of them make their debut to audiences in the annual "Raw Stages" festival. This season includes three such works - Teen Idol: The Bobby Vee Story, the upcoming The Highwaymen (which is NOT about the country music super group, but rather the building of I94 through the Rondo neighborhood), and this spring's new musical Sweet Land (although this piece had a long history of workshops before it landed at the History Theatre). Now is your chance to get in on the next big hit, see it in its early form, and share your feedback with the creators as they continue to develop the piece. Keep reading for more about each show, and make your plans to head to downtown St. Paul to experience some exciting new works of theater.

Wednesday January 11 730pm: Stewardess by Kira Obolensky, directed by Hayley Finn, performed by Tracey Maloney, Terry Hempleman, Sandra Struthers, Jasmine Hughes, Kimberly Richardson, Charles Fraser, and John Middleton, with stage directions read by Jen Burleigh-Benz.
Stewardess first made an appearance at Raw Stages 2015, and returns with a greatly revised script. It tells the true story of Mary Pat Laffey, the stewardess who sued Northwest Airlines for gender discrimination (demanding equal pay, promotions, and the end of weight checks and mandatory firing upon getting married or turning 32), a case she eventually won - after 15 years. In this version of the play, Mary Pat's journey is intermingled with other women's struggles for equality, including Gloria Steinem. This brings in a bit of a fantastical element, along with a character named "Fact Checker" who informs the audience what's real and what's not, that I found a charming addition. But I missed the more developed supporting characters from the previous version of the work, and there are still some scenes that feel a bit pedantic. But there are definitely the makings of a great play here, and I look forward to the next iteration. It's so important to tell this story and honor these women's contributions to the freedoms and equality we enjoy today, and to be reminded that we still need to be vigilant and fight inequality wherever we find it.

Thursday January 12 730pm: Mr. Hemingway by Kevin Kautzman, directed by Anya Kremenetsky, performed by Steve Hendrickson, Karen Weber, Nicholas Freeman, Kate Guentzel, and Sean Dillon.
I missed this one, but here's the description: "A glimpse into Hemingway's final days at the Mayo Clinic as he wrestles with inner demons and his ultimate writer's block. (A new version of the script from Raw Stages 2015.)"

Saturday January 14 2pm: A Crack in the Sky by Harrison David Rivers and Ahmed Ismail Yusef, directed by Harry Waters, Jr., performed by Harry Waters, Jr., Darius Dotch, Dan Hopman, Adam Western, Charla Marie Bailey, and Jennifer Blagen, with stage directions read by Jen Burleigh-Benz.
Ahmed Ismail Yusef, the author of the book Somalis in Minnesota, teamed up with Playwrights' Center core writer Harrison David Rivers to write his story of immigration, education, and finding his voice. The result is a play that's both deeply personal and moving, and really well constructed. We meet Ahmed in Minnesota, and follow his journey from almost being expelled from college, to discovering his love for writing. The play uses puppetry (to be added in a full production), Somali singing (done by Ahmed himself for this reading), and a bit of magical realism in the animals Bird and Cheetah that are like Ahmed's inner voices, the angel and devil on his shoulder. It's a compelling story and one that needs to be heard right now. I hope to see it performed in St. Paul soon, and maybe even in St. Cloud, which sadly seems to be suffering from much anti-Muslim sentiment. The Somali culture and people are a part of Minnesota, and this play tells the story of one Somali immigrant with such humanity, humor, poignancy, and relatability that it might help more Minnesotans to understand and embrace them.

Sumday January 15 2pm: Lord Gordon Gordon by Jeffrey Hatcher (book) and Chan Poling (music and lyrics), directed by Ron Peluso, music direction by Robert Elhai, performed by Mark Benninghofen, Dieter Bierbrauer, Gary Briggle, Sean Dooly, Ann Michaels, Sandra Struthers, Marty Ruben, Randy Schmeling, and Sally Ann Wright, with stage directions read by Jen Burleigh-Benz.
I would like Jeffrey Hatcher and Chan Poling to write a musical about every weird true crime story in Minnesota! Their follow-up to the hugely successful Glensheen (returning to the History Theatre this summer) is Lord Gordon Gordon. Based on the absurd true story of a fake Scottish Lord who swindled many prominent Minnesotans out of thousands in the late 19th Century, and then conned NYC robber baron Jay Gould for one million dollars, it smells like a hit, perhaps even more so than the first reading of Glensheen did. Only the first act was presented, and left me wanting to see more. It's similar in tone to Glensheen - a clever and hilarious satire, and once again features a fantastic score. I'll be counting the days until I can see this again (2017-2018 season please!). Lord Gordon Gordon is a fantastic conclusion to a series of really promising and exciting new works, and once again proves that truth is stranger than fiction, and turns into gold when the team of Hatcher and Poling get their hands on it.