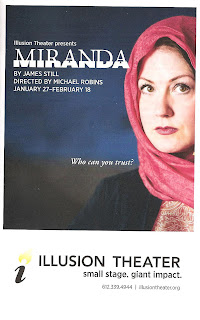 The titular character of James Still's new play Miranda is like Homeland's Carrie Mathison, but more grounded in reality, without all of the soap opera drama. A CIA operative currently based in Yemen after years of working in the Middle East, she's good at her job, but has begun to grow weary with all that her job entails. The playwright notes, "While the pursuit of happiness may be one of the inalienable rights guaranteed in our Declaration of Independence, Miranda is too smart not to know that happiness is elusive. She's thrived during her years in the CIA in the pursuit of meaning, not happiness. But what if that meaning and sense of purpose has faded with time and age - what now?" Miranda is a dense and fascinating play about the women and men who immerse themselves in foreign lands to secure intelligence for the US government, but also find themselves getting entangled in the lives of the people they live among.

After a traumatic event that is slowly revealed, Miranda finds herself stationed in the war-torn country of Yemen (I'll admit I know next to nothing about Yemen, but the program includes some informative articles about the issues they're facing, along with other relevant topics). She's assigned to turn Dr. Al-Aghbari into an informant, under the cover of working for an organization that brings arts to kids and thereby bring about peace and harmony. It's an idea she poo-poos, and it does sound idealistic, but in working this cover she gets to know a teenager named Shahid, and really bonds with him as they read and perform Shakespeare's Othello (a play I've seen but don't really remember, or quite understand how it fits into the story). On a personal level, Miranda feels guilty about forgetting her mother's birthday, calling her to talk about her job at Ikea (their code for the CIA), and finds out some startling information about her brother that makes her rethink everything. When her friend and boss retires, and the CIA shuts down most of the operations in Yemen because of increasing danger, Miranda is forced to move on.

The five-person cast, directed by Michael Robins, all give strong performances in this difficult piece that includes some Arabic dialogue. Carolyn Pool, who I know mostly as a comedic actress, is really wonderful as Miranda, making her very human, complex, and relatable. Also great are Steve Hendrickson and Beth Gilleland in dual roles as Miranda's friends that are more than they seem, and her CIA colleagues; Delta Rae Giordana as the doctor who gives up information in exchange for supplies for her patients; and Ricky Morrisseau as the smart and funny teenager who finds solace in Shakespeare.

All elements of design combined to create a sense of time and place. The play takes place in different locations and time periods, and the multi-level segmented set (designed by Dean Holzman) makes for some fluid transitions between scenes, with Miranda often stepping from one scene right into the next. The transitions are also aided by the lighting (designed by Michael Wangen). Characters are dressed in simple appropriate clothing, including head coverings for the women, and American t-shirts for Shahid (costume design by Barbara Protiga). Lastly, projections are used wisely to show a map or scene from the location, giving us a sense of where we are without hitting us over the head with it.

It's a complicated world, and Miranda is a complicated play full of complicated characters. It shines a light on a corner of the world most of us have never visited and can't even imagine, and the people that willingly immerse themselves in that world to help not just the US but also the people they live and work with, humanizing both sides.

Miranda continues at Illusion Theater in downtown Minneapolis through February 18.