"Gloria" at the Goodman Theatre in Chicago 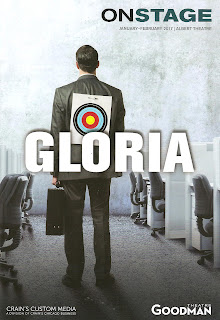 Since we were in Chicago to see Hamilton last week, my friends and I decided to check out the local theater scene too. We were able to get some nice last-minute seats to Gloria at the Goodman Theatre, which, as it turns out, has something in common with Hamilton: it was a finalist for the 2016 Pulitzer Prize in drama, which of course went to Hamilton. The Goodman production is basically a remount of the Off-Broadway production at the Vineyard Theater, with the same director, cast, and much of the design team. Written by up-and-coming young playwright Branden Jacobs-Jenkins, whose work was recently seen in the Twin Cities in Mixed Blood Theatre's production of the crazy brilliant An Octoroon, Gloria is another smartly written and thought-provoking observation of and comment on the world we live in. I hope and expect to see it produced in the Twin Cities in the not too distant future.

While An Octoroon uses some meta-theater and fantastical tricks (including the playwright as a character in the play and a person in a bunny suit) in the adaptation of a popular 19th Century melodrama of the "Old South," Gloria is set squarely in modern times, with a much more linear and realistic progression of plot. And while it doesn't deal with racism in the way that An Octoroon does (at least not directly), it does tackle other timely issues, including generational conflict, workplace relationships, the struggle for success (specifically in NYC), and our obsession with celebrity, tragedy, and particularly the intersection of the two.

This is the kind of play about which it's important not to give too much away. Suffice it to say that what begins as a very funny and real workplace comedy turns into something much deeper and darker. Set in the office of a magazine, we meet three assistants: young and optimistic Ani (Catherine Combs); Kendra (Jennifer Kim), who spends most of her time shopping and getting coffee; and aspiring author Dean (Ryan Spahn). All three have bigger dreams beyond being an assistant. They, especially Dean, begin to worry that eager intern Miles (Kyle Beltran) is out to take their jobs. We also meet a few people a little further on in their careers, but still unsatisfied. Gloria (Jeanine Serralles) is good at her job but no one really likes her (she hosts a party that no one attends), and fact checker Lorin (Michael Crane) laments that he's still stuck in this thankless job in his late 30s.

When a pop star dies suddenly of a drug overdose, the magazine's employees are sent into a frenzy preparing a profile on the fading star. Lorin wonders why we suddenly care about her now that she's dead, providing interesting commentary on how celebrity death means big business for pop culture magazines, websites, and authors. Similarly, real-world tragedies are used to sell books and make movies. We are a culture obsessed with the tragedies of others, and we like to make it all about us, rather than the actual victims.

Director Evan Cabnet gets great performances out of his six-person cast, who make the sharp and witty dialogue feel natural. Perhaps because this is their second time working on this piece together, they have an easy rapport and chemistry amongst them. The cast, some of whom (spoiler alert!) play more than one character, do a great job of bringing these characters to life and making you love or loathe them, and sometimes both.

Gloria turned out to be a great choice for a short theater weekend in Chicago. There are so many layers to the plot, characters, and dialogue, that it inspires much post-show discussion (and reading of the informative articles in the Goodman's playbill). Gloria continues at the Goodman Theatre through February 19, and hopefully we'll get to see it in the Twin Cities soon, as well as more of Branden Jacobs-Jenkins work.