"Little Shop of Horrors" at Artistry 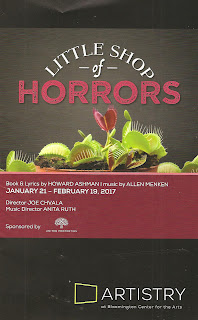 I love Little Shop of Horrors. While I wasn't too familiar with the beginnings of it (it started as an Off-Broadway musical in the early '80s and was made into a movie in 1986), I was lucky enough to see the original Broadway run when it finally landed there in the early aughts. The campy and nostalgic story of a 1960s plant shop employee who sells his soul to the devil in the form of a man-eating plant is full of unique charm. It may not be a typical musical with its small cast, small band, and darkly comic subject matter, but it has become a classic, and I'm glad that Artistry (formerly known as Bloomington Civic Theatre) continues to include non-traditional musicals in its programming, even if the BCT Sunday matinee crowd didn't seem that into it. I overheard a comment in the ladies' room that "it's not Camelot," but that's exactly the point. Artistry's production is perfectly cast, features a fun and colorful set, and beautifully captures that campy tone - definitely worth the drive to the southern suburbs.

First, a brief plot summary. Aspiring botanist Seymour finds a strange and interesting plant and brings it into Mushnik's Flower shop, where he works with Audrey. He soon finds out that the plant, named Audrey II, will only grow if he gives it blood, but in return it makes Seymour's life wonderful - the failing flower shop flourishes, Seymour becomes famous, and most importantly, he thinks it makes him look better in Audrey's eyes. But the dilemma comes when Seymour needs to find more sources of blood to satisfy Audrey II's growing appetite. He's sold his soul to the devil and there's no turning back.*

Here are 10 reasons to see Artistry's Little Shop of Horrors before it closes on Feb. 19:


*Plot summary borrowed from what I wrote about the 2014 production by 7th House Theater.