"Liberty Falls 54321" by The Moving Company at The Lab Theater 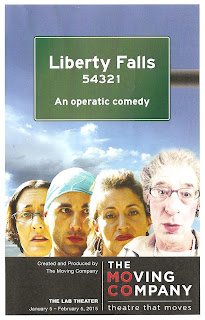 This weekend, The Moving Company is bringing back their "absurdly funny, surprisingly musically delicious, awkwardly cringe-worthy, and just plain ridiculous (in the best possible way)" Liberty Falls 54321, an operatic comedy. I really loved it the first time around in December of 2015 (and yes, I just quoted myself), and fortunately they've brought back the entire dream team of a cast (I think I've got my first nominee for "best comedic performance by an ensemble" for next year's TCTB Awards). The show is mostly the same show, with a few more topical jokes added referencing the recent election. Whether or not you saw it last time, Liberty Falls 54321 provides a hearty laugh in bleak times, best said by a note in the playbill: "You've got to admit, there's a lot of ugliness out there right now. So, we ask ourselves - what would Moliere do? Well, he'd look at it right in its wrong, ugly face. And make some fun out of it. Have a good old laugh at it. Yes, sometimes you just have to laugh at it all." A good old laugh indeed.

Since the show hasn't changed much since last time I saw it, I'll just share with you what I wrote then, with a few new reflections at the end.

Liberty Rose (Steven Epp) is the oldest resident of Liberty Falls, WI, and the last remaining member of the founding family. As such, the town plans to gather at the cafe-nasium (half cafeteria, half gymnasium) to celebrate her. Shortly before the event, a real-housewife-type event planner (Jennifer Baldwin Peden), a taciturn entertainment coordinator (Christina Baldwin), and an enthusiastic neighborhood volunteer (Nathan Keepers in drag, natch) meet to arrange the activities. A DJ named DJ (Gabriel Murphy) shows up and they painfully walk through the music, comedy, and seating arrangements. Soon the guest of honor and her granddaughter/caregiver Serendipity (Heidi Bakke) arrive. It's soon revealed that this sweet old lady sounds like one of those old people who has been brainwashed by Fox News (although she was a paranoid racist before TV was even invented), and is horrified when Dipity's black boyfriend (Dom Wooten) arrives. Amidst the shenanigans the program's audience arrives, as everyone suddenly sees us, the play audience, sitting in the bleachers. We then become part of the show as the program begins, highlighted by an operatic re-enactment of the founding of the town (involving mermaids, commonly found in Wisconsin). Without giving too much away, it turns into a Weekend at Bernie's situation that is so so wrong, and so so right. 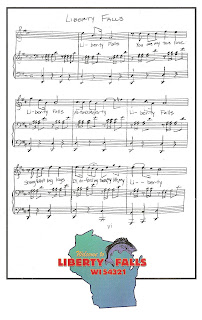 The cast is so relaxed and natural in their performances and interactions that you would be forgiven for thinking they're just making it up as they go along. On the contrary, I suspect a lot of work and thought goes into creating a performance so specific, detailed, and intricately choreographed. It's also fortunate that the cast includes comedic actors who sing opera, or maybe they're opera singers who do comedy. Either way, the gorgeous sounds coming out of Christina, Jennifer, and Dom belie the silliness of the surroundings. It's been a while since I've had the pleasure of watching the Baldwin sisters perform together, and it made me wish they'd do every show together [update: they were in Nautilus' The Fantasticks together last year, and I still wish they'd do every show together]. Listening to them sing bad karaoke is almost as pleasurable as listening to them sing gorgeous soaring operatic harmonies together. I'm not sure what songs they were singing, but I'm certain I heard the words "busy mother's casserole" and "tuna chow mein" as they ran and rolled across the stage.

Each member of this ensemble has created a specifically odd character that's consistent throughout the show. With the perfect slow crouched shuffle of an old lady, and some pretty great stage make-up, Steven looks every one of Liberty Rose's 107 years. Nathan gives his physical comedy skills a workout tripping over things and falling through a folding chair, as one does. Heidi has some ridiculously and hilariously drawn out crying fits, and I can't even describe what the Baldwin sisters have transformed themselves into. Here, take a look:


Some new reflections:
Liberty Falls 54321 continues at the Lab Theater through February 5.