"Hamilton" at the Private Bank Theatre in Chicago 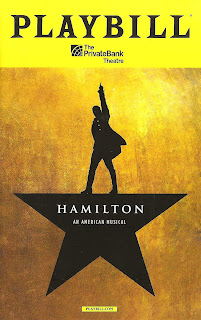 Seeing Hamilton on Broadway in the fall of 2015 is and will always remain one of the most memorable theater experiences of my life. This was back before the Tonys, back before tickets were impossible to get, back before we listened to the cast recording obsessively and memorized every word (well, not every word, there are a lot of words), back before Hamilton was the standard by which we measured everything, back before there was a we knew there was a Hamilton quote appropriate to every situation. Going into the show that first time, I didn't know much about it, other than it was fantastic. But I wasn't expecting it to be so brilliant, so emotionally impactful, so relevant and revelatory. I was absolutely blown away. Seeing it again 14 months later, in Chicago, is different. The show is mostly the same, albeit with a new but just as talented cast, but the world is different than it was 14 months ago (one could say "the world's turned upside down"), I'm different than I was 14 months ago, my knowledge of the piece is different than it was 14 months ago. Seeing it a second time could never be as mind-blowing as the first time - I know what to expect now. But in a way it's a richer, deeper experience, precisely because I know what to expect. I was able to see and hear things in a way I couldn't that first time, because there's just so much to take in. So if you get a chance to see Hamilton a first, second, or twenty-fifth time - take it. The national tour begins soon and will come to Minneapolis sometime next season, and the New York and Chicago productions will likely not be going anywhere anytime soon.

I'm not going to rehash my full thoughts on this brilliant, layered, entertaining, enthralling piece of modern music-theater, you can read them all here. Lin-Manuel Miranda's singular (and Pulitzer Prize-winning) creation is every bit the work of genius in Chicago as it is on Broadway. The new cast is fantastic, and although I missed one of my Broadway faves Joshua Henry by just a few days (he's joined the tour, and my fingers are crossed he stays with it through Minneapolis), and Karen Olivo was out the night I saw it, I was not disappointed. Highlights in this multi-talented and multi-ethnic cast include Miguel Cervantes in the title role, every bit the flawed hero; Wayne Brady as Aaron Burr (although I'm disappointed they went the route of stunt casting, Wayne most definitely has the chops to play this role); a charming Ari Afsar as Eliza Hamilton; Chris De'Sean Lee, filling the very difficult shoes of Tony-winner Daveed Diggs as Lafayette/Jefferson; and total scene-stealer Alexander Gemignani, who managed to make the role of King George totally his own and totally hilarious.

I saw Hamilton on the night before the inauguration, with one of my oldest and two new friends. When we booked the tickets, we didn't know that we would be seeing the show on this historic and divisive weekend. But it turned out to be the perfect time to see it, and we were also able to take part in the Ghostlight Project before the show at Steppenwolf Theatre. Theater artists and theater supporters across the country (including many in the Twin Cities) joined together "to make, or renew, a pledge to stand for values of inclusion, participation, and compassion for everyone regardless of race, class, religion, country of origin, immigration status, (dis)ability, age, gender identity, or sexual orientation." Two days later, millions of women and men marched in support of these ideals, the same ideals that come across so clearly in the quintessential American work of art that is Hamilton. I take renewed and continued hope from the idea that America is stronger than any one person, group, or party. America is all of us and America needs all of us. We owe it to Alexander and Eliza Hamilton to continue their legacy, to tell their story. History has its eyes on us.

Tickets for Hamilton are available through the official websites, but you'll have to plan months in advance. It's worth the wait. Click here for Chicago tickets (a much easier get, and a shorter trip from Minnesota); click here for Broadway tickets.