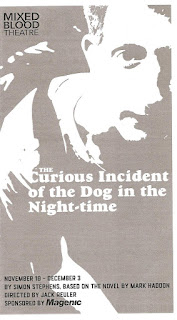 The Curious Incident of the Dog in the Night-Time racked up awards in both London and NYC, including winning the Tony Award for best play in 2015. Just last year the Broadway tour stopped in Minneapolis, which I saw and was impressed by the clever and inventive storytelling. Now available for regional productions, Mixed Blood Theatre is bringing us their take on the play. The West End/Broadway production was very tech-heavy, and I was curious what this story with a smaller-scale production and in a smaller house would look like. It turns out I like it even better, but I generally always like smaller cast, smaller scale, smaller house versions of plays and musicals which make the story feel more intimate and real. In this case, the 15-person Broadway cast has been reduced to just 9, with very smart casting and direction by Mixed Blood's Artistic Director Jack Reuler. There are still some pretty impressive tech effects, but also some great low-tech effects that all serve this story of a 15-year-old boy with an unspecified autism-like condition who goes on an epic journey in search of the truth. And it still has a real live puppy and real live maths!

Christopher lives in Swindon, England, about 80 miles west of London. The titular incident is when Christopher finds his neighbor's dog murdered, stabbed with a garden fork (which is British for pitchfork). He is greatly disturbed, and vows to find out who the murderer is, even though it means leaving his comfort zone and talking to his neighbors. His mother died two years ago so he lives with his father, who tells him to drop it and not make trouble. But Christopher continues with his investigation, which leads to uncovering not only what happened to the dog, but even more pivotal truths about himself and his family. He successfully travels to London on his own, despite the overwhelming stimuli for a boy with his condition, and eventually returns home to take a special test in maths (which is British for math). Through his adventures Christopher finds that he's more capable than he thought he was, and as able to grow and learn as anyone.*

The story is told through Christopher's school counselor Siobhan reading a book he wrote about his experiences, while we see some of the scenes acted out. There's even reference to the school making his book into a play, which results in some fun fourth-wall breaking and several meta layers of storytelling. The design is of course not as elaborate as the Broadway version, but is just as clever on a smaller scale. Kathy Maxwell has created some magnificent video effects, of abstract moving shapes and colors, cityscapes, or nature scenes. Combined with cool techy music composed by Eric Mayson, it evokes the same sort of feeling. The rest of the effects are done with well-choreographed movement of set pieces by the ensemble. Joseph Stanley's set design consists of a raised thrust stage with drawers and compartments along the edge holding props, delivered to the stage by ensemble members with perfect timing. And the old-fashioned effect of a toy train is as charming and magical as anything technology could create.

The five-person ensemble (Bruce Young, Lipica Shah, Raul Ramos, Tinia Moulder, and Tom Reed) spends most of the play, when not involved in a scene as a multitude of characters, sitting in the first row of the audience. I was just two seats away from one such designated seat, so I got an up close view of the action, as they knew exactly when to hold up a basket of laundry or floss or a potted plant to emphasize the narration.

MacGregor Arney is making his Mixed Blood debut, and gives a brilliant performance as Christopher. Through physicality (constant motion), voice (the accent, rapid speech pattern, and moaning when distressed), eye contact (none), and facial expressions, he becomes Christopher in a very real and believable way. As Siobhan, Regan Linton is a wonderful narrator and support for Christopher. Zack Myers returns to Mixed Blood after his debut in How to Use a Knife last month, and he's just lovely as Christopher's dad, warm and tender at times, angry and aggressive at others. Miriam Laube is also excellent as Christopher's flawed but loving mom. And by the way, everyone speaks with various types of British accents, consistent and fun to listen to across the board (thanks to accent coach Cheryl Willis).

The Twin Cities Theater Bloggers named Mixed Blood the most accessible theater last year for a reason, and it's perhaps never been more apparent than in Curious Incident. From telling a story of a boy with autism, to the inclusion of people of various ages, ethnicities, and abilities in the cast and creative team, to a special performance for audience members that are both deaf and blind, to the Radical Hospitality program, it's all about making sure everyone is represented and feels welcome in the audience and on stage.

This Curious Incident of the Dog in the Night-Time may be on a smaller scale than the West End/Broadway version, but the impact is no smaller. In fact, the story is even more impactful and immediate in the smaller space, told by an excellent cast and clever design elements. Curious Incident continues through December 3. I do recommend making a reservation for this one if you're able, it's selling very well already and there might not be many Radical Hospitality seats left, especially on weekends.


*Plot summary borrowed from what I wrote about the Broadway tour.