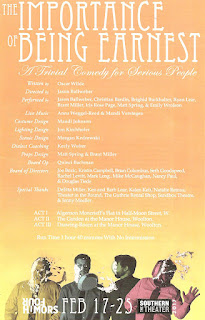 "Why would Four Humors do The Importance of Being Earnest? We acknowledge what is happening in the world right now, and we do not believe in running from our problems. However, we do believe taking a break from our problems is a very healthy thing. There is a theory that when we laugh, our mind is cleared and we are able to see our problems with fresh eyes. We hope this production will achieve this renewal and allow all of us to leave the Southern Theater with our heads held high, ready to tackle our challenges with renewed vigor and purpose. The act of art alone is worth fighting for. We hope you come play with us today, so we can continue our work tomorrow." I wholeheartedly agree with this statement by Four Humors, and their perfectly delightful production of Oscar Wilde's The Importance of Being Earnest definitely meets this goal. In this classic play, subtitled "a trivial comedy for serious people," Wilde brilliantly satirizes the high society of Victorian England in this absurd comedy of mistaken identities, and the consistently funny theater troupe that is Four Humors is the perfect company to bring us a good laugh in these... unusual times.

It's been a while since I've seen Earnest, so I don't recall if it's always a 90-minute-no-intermission show (my favorite thing), but it works here. The story begins in the city home of Algernon, where his friend Earnest confesses that his real name is Jack, and Earnest is the name of a brother he invented as an excuse to go to town. He wants to marry Algernon's cousin Gwendolen, but her mother Lady Bracknell isn't too keen on the idea considering Jack/Earnest's suspicious beginnings. We then move to Jack's country estate where Algernon impersonates Jack's fictitious brother Earnest in order to woo his ward Cecily. You can imagine the confusion when Gwendolen arrives to see her fiance Earnest and finds the other lady also recently engaged to an Earnest. They soon straighten things out as the men confess their true identities, but there's still the matter of Lady Bracknell, and a surprising confession that changes everything.

What else can I say about Four Humors' take on The Importance of Being Earnest, other than it's really funny and the 90 minutes fly by as you forget about the outside world for a little while. To learn more, watch One Girl, Two Cities' Laura interview Four Humors on the Twin Cities Theater Bloggers Facebook page, and then visit the Southern Theater's website for ticket info, where you can also learn about their ARTshare program that lets you see unlimited theater for a modest monthly fee. (But hurry, Earnest only plays through February 25!)