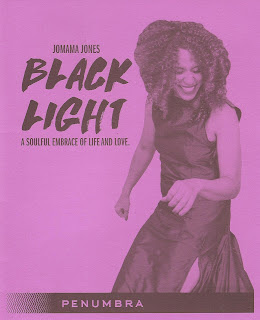 In the darkness of the theater, a soothing voice was heard saying "what if I told you: we're going to be all right." I exhaled deeply, as if I'd been holding my breath for the last two weeks. Because in my 43 years on this planet, there's never been a time when I've been less sure that "we're going to be all right." Jomama Jones in Black Light: A Soulful Embrace of Life and Love was exactly the balm I needed at this moment in time. Telling stories, singing, and performing, she made me laugh, she brought tears to my eyes, she made me believe, at least for a little while, that there is a light at the end of this tunnel we've found ourselves in (or perhaps, put ourselves in). This Black Light is shining through at St. Paul's Penumbra Theatre for a short time only, so don't miss your chance to experience what truly is "a soulful embrace of life and love."

Jomama Jones is the alter ego of New York based theater artist Daniel Alexander Jones, a Penumbra company member in the '90s. Jomama has been touring and releasing albums for years and has performed in the Twin Cities before, but this is my first time experiencing her unique talents. She's a marvelous performer, but her greatest talent is as a storyteller, captivating the audience with stories from her childhood. Stories about science, her beloved but slightly scary Aunt Cleotha from "down South," and her love of Prince as a teenage girl in 1979. She seamlessly segues from stories to songs, performing original songs (written by Jomama with collaborators Bobby Halvorson and Dylan Meek) with her awesome four-piece band (led by Samora Pinderhughes on piano and featuring some local musicians) and two backup singers. Some songs are fun and upbeat, some are lovely and slow, all have something to say.

In just 90 minutes, Jomama entertained the crowd and took us on a journey, wearing three different
dresses - each more fabulous than the last (the draped purple sparkly multi-colored number is everything!). She's a master at engaging the audience, including us in her show, and making us feel at ease. There is some audience participation, but not in a scary way, and only because she really wants to connect with the audience, and for us to connect with her and each other.

Here are a few things I learned from Jomama that I will cling to in the coming days, weeks, years, and remember when I'm feeling discouraged and hopeless:


Black Light: A Soulful Embrace of Life and Love continues at Penumbra Theatre through February 12.