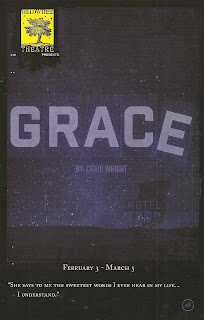 Yellow Tree Theatre's production of Craig Wright's very dark comedy Grace starts with a bang (literally) and doesn't let up. Yes there are comic moments, but it's very intense and heavy. After less than 24 hours of letting it settle I'm not sure how I feel about the play (violence is difficult for me to watch, especially in such a small space), but I am sure this is an excellent production. You couldn't ask for a better cast than these four - two familiar Yellow Tree faces and two faces new to this stage. Director Terry Hempleman (who also directed Yellow Tree's last Craig Wright play, The Pavilion), clearly lays out the issues of faith, forgiveness, and connection that the play explores, and walks that fine line of subtle comedy in the midst of great tragedy. This is a tough play to watch (which is maybe why there were more empty seats on a Wednesday night in Osseo than there usually are), but if you can make it through the ugly violence of the play, there are moments of beauty to be found, and plenty of ideas to be left contemplating as the lights come up.

The show begins with a gunshot, when the situation between a couple and their neighbor comes to a head. Time then reverses (with some cool repeated dialogue and reversing of scenes) and we learn how they got there. "Committed Christian" couple Steve (Jason Peterson) and Sara (Mary Fox) have recently moved from Minnesota to Florida. Steve works in hotel remodeling, and struck up a multi-million dollar deal with a mysterious Swiss investor. But despite his faith, the deal (which sounds suspicious from the get go) goes south, leaving Steve devastated and confused. Meanwhile, Sara has made friends with their neighbor Sam (Kurt Kwan), a NASA engineer in a deep depression because of the car accident that killed his girlfriend and left him physically and emotionally scarred. Steve convinces Sam to invest in his hotel deal, and then asks him if he went to church as a child (hint: if someone you just met asks you if you go to church, run the other direction). It's a question he also asks the exterminator (played by director Terry Hempleman), getting an answer he doesn't expect from the German immigrant who survived WWII. There are some pretty intense discussions about faith, the nature of God, and why bad things happen. Steve's clear cut faith is never shaken, until everything falls apart, but Sara is a bit more open-minded, and finds a connection with lost soul Sam. The end brings us back to the gunshot at the beginning, and now we know how it happened, but I'm not sure it's ever possible to understand why such things happen.

In Yellow Tree's intimate space, there's nowhere to hide from the harshness of the play; what's happening on stage feels visceral and real. Everyone in the cast is so natural in their roles that you believe their every moment, seeing the expression on their faces and the raw emotion in their eyes from just a few feet away. In many scenes we see what's going on in both apartments simultaneously, which takes a minute to adjust to but is a fascinating way to have the characters and conversations play off each other. The intensity of the conversations contrasts nicely with the bright and sunny Florida apartment filled with wicker furniture and floral patters (set design by Katie Phillips). One thing there's no conflict about is the fantastic soundtrack of old country, gospel, and spiritual songs (created by the director and sound designer Montana Johnson).

Grace continues at Yellow Tree Theatre through March 5. Check it out to contemplate some big ideas and witness some terrific acting in a play that's both disturbing and enlightening.