"King Lear" at the Guthrie Theater 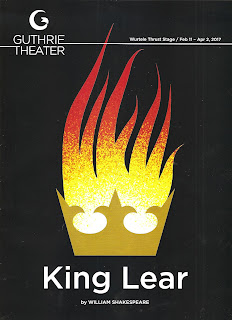 King Lear is considered one of Shakespeare's best tragedies, and the title role one of the most challenging roles to play in all of theater. The Guthrie Theater returns to King Lear for the first time in 22 years, and has hired not one but two beloved veterans of the Guthrie and other Twin Cities stages to tackle the role. Nathaniel Fuller and Stephen Yoakam take turns playing the lead and you can see the schedule here, although you really can't go wrong with either one - both are incredibly talented actors. Stephen Yoakam played Lear the night I saw the show, and gave a powerful performance, as did many in the large and talented cast. Combined with the gorgeous overall design of the show, this King Lear is a stunner.

But I have to admit (as I've said before): I have a hard time with Shakespeare. Never having studied his work (Maureen, I'm not a theater person) other than reading a few plays in high school, it's hard for me to get into the language and really hear and feel the story. The only theater company that really allows me to do that easily is Ten Thousand Things, who often edits Shakespeare down to a more manageable length and tightened story. But when done in the traditional manner, it's a bit of a struggle for me just to stay present and really focus on what's happening, unless it's a play I'm very familiar with (namely, Hamlet, Romeo and Juliet, and A Midsummer Night's Dream). And though I have seen King Lear twice before, it's been a while, so I found myself a bit confused at times about all these characters and their motivations for doing some of the crazy things they did.

That being said, there are some things I really enjoyed about this production, such as:

To recap - this is a beautiful and top-notch production of one of Shakespeare's greatest plays. But if you're like me, you'll need to work hard to stay present and engaged for the nearly three-hour runtime (and getting up at 5:30 to go to 6 am yoga on the day you see the show is not advised #bloggerproblems).

King Lear continues through April 2 on the Guthrie's Thrust Stage.