"Deathtrap" at Theatre in the Round 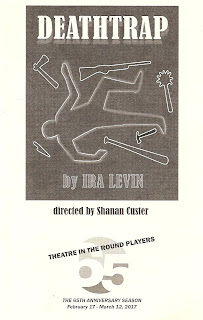 Who knew murder could be so fun?! In Theatre in the Round's production of the 1978 play Deathtrap, it is. This stage thriller that pays homage to classic stage thrillers while at the same time mocking them is full of jaw-dropping plot twist and plenty of humor. Twin Cities Theater Bloggers' winner for favorite comedic performance in 2016, Shanan Custer, directs the strong five-person casts and keeps the laughs and the surprises coming. Deathtrap is a fun and engaging escape from the troubles of the real world, a place where we all know murder is pretend so we can laugh at the ridiculousness of the plotting.

I saw Deathtrap at the Jungle Theater four years ago, but fortunately my memory is poor enough that I didn't remember any of the plot twists. It was as if I was seeing it for the first time! I really don't want to give away too much of the plot, because watching it unfold is part of the fun. Usually you can sort of tell where a play is going or how it's going to end, but watching Deathtrap, as each scene ended, I had no idea where the next scene was going, which certainly kept me alertly watching throughout the show.

The play centers on once-great playwright Sidney Bruhl (Charles Numrich), who is desperate for another hit. When a student from his seminar (Vincent Hannam) sends him what could be that hit, he hints to his wife Myra (Tina Frederickson) that he just might be willing to kill the man to make that hit play his own. After all, he's written enough murder mysteries for the stage to be able to conduct one in reality (or so he thinks). Sidney invites the young playwright Clifford to his home, to his wife's dismay. The plan continues, but not in the way you might think. There's also a Dutch psychic (or as they called it in the late '70s, ESP, played by Meri Golden), and a lawyer (Todd O'Dowd) called in to settle some affairs. To say much more would be to spoil the fun, so you'll just have to see it for yourself to find out what happens.*

Set and costume designer John A. Woskoff (with prop design by Robert J. Smith) has realistically created a late '70s Connecticut carriage house on the in-the-round stage. This is a play that requires very specific set configuration and props, which could be a challenge in the round, but has been worked out quite well. Around the outside of the space are shelves and display cases chock full of vintage books, magazines, tchotchkes, and the weapons that Sydney collects (some of which figure into the action). The sofa divides the space between the all-important fireplace and desk. Lighting (Bill Larsen) and sound (Eric Webster) help to create the feeling of tension at just the right places.

Deathtrap continues at Theatre in the Round, the longest running theater in Minneapolis, through March 12. Check it out for some suspenseful, surprising, trippy fun.


*Plot summary borrowed from what I wrote about the Jungle Theater production four years ago.