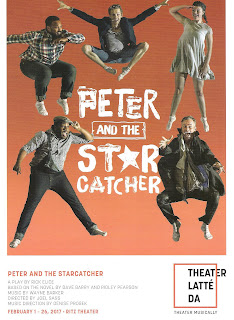 The 2012 Broadway play with music Peter and the Starcatcher is not your typical Broadway musical, or rather, play. I was fortunate enough to see the original Broadway production and the subsequent Broadway tour, and was charmed by the innovative storytelling. I don't know how long it's been available for regional production, but I'm so glad Theater Latte Da snapped it up quickly. It's a perfect piece for the company whose motto is "we don't do musical theater, we do theater musically." And innovatively, and smartly, and brilliantly. With director Joel Sass making his Latte Da debut and a fantastic and diverse ensemble of nine actors (slightly smaller than the 12-person ensemble used on Broadway), this Peter and the Starcatcher is so charming and clever and inventive, just sheer delight from start to finish.

Peter and the Starcatcher is based on the 2004 novel Peter and the Starcatchers by Dave Barry and Ridley Pearson, a prequel to the Peter Pan story with which we're all familiar. Much of the story is explained to us in narration by the ensemble. The title character is an unnamed and unloved orphan who's sold into slavery along with two other boys. They're being transported on the ship Neverland, captained by Slank and his rough and rowdy crew. Also on board are 13-year-old Molly and her nurse, Mrs. Bumbrake. Molly's father, the well-to-do and important Lord Aster, has entrusted her to the captain while he travels on a more dangerous route aboard the Wasp, on a mission for the queen. He's transporting a trunk of the mysterious "starstuff" that unbeknownst to him has been swapped with a similar trunk of worthless sand by the devious Captain Slank. Aster's ship is overtaken by pirates, namely the dastardly Black Stache and his sidekick Smee, and much hijinks and hilarity ensue as the pirates try to get the treasure and Molly and the boys try to save it and her father. The action continues in the second act as they all land on a colorful tropical island. It's a sweet and engaging story with a heroine and a hero to root for, clever puns and alliterations mixed with modern references, and a theme of home and friendship and belonging, as the unnamed boy becomes the legend that is Peter Pan.*

This truly is an ensemble in the best sense of the word, with all nine actors playing multiple parts and taking equal turns in the storytelling. Each one of them is completely invested in the playful nature of the storytelling, and they really work and play beautifully together. You could spend the entire show just watching any one of the actors, and be thoroughly entertained.

In a serendipitous (and perhaps intentional) twist of casting, Tyler Michaels reprises his role as Peter Pan, whom he played in the Children's Theatre's marvelous production a few years ago. But this is a very different Peter, a broken and hurting Peter who only wants love and a family, two things he's lived without his whole life. It's really fun to watch Tyler in that transformation from lost boy to hero, even striking the familiar hands-on-hips pose as he comes into his own. Tyler always imbues his characters with a specific physicality, and the nimble boy Peter is a perfect showcase for his unique talents.

But Tyler is by no means the only star in the show, in fact they're all stars, none less so than Megan Burns, who is perfectly delightful as our spunky heroine Molly. She just shines from the stage, with a natural charm and great energy as she plays this wonderful role model of a young woman who's smart, determined, kind, and knows how to get things done.

This wonderful ensemble also includes Ricardo Beaird and Silas Sellnow as the adorably boyish orphans; Pearce Bunting, hamming it up deliciously as the pirate Black Stache; Adam Qualls as two different but equally hilarious characters; Andre Shoals as Molly's kind and distinguished father and the leader of the island people; James Rodriguez as the conniving Captain Slank; and last but not least, the endlessly watchable Craig Johnson as the stern and loving Nanny Bumbrake and a wise mermaid.

The music is integrated organically into the script, and is often sung a capella or with minimal accompaniment by the cast beating on various objects on the set, or Silas Sellnow on various stringed instruments. On a few songs an offstage piano can be heard, presumably played by Latte Da's resident Music Director Denise Prosek. Because the music is woven seamlessly and sparingly into the story, there are no annoying applause breaks to interfere with the spell being cast.

As he often does at the Jungle, director Joel Sass has also designed the set, making for a beautiful cohesion in the production. The proscenium arch is decorated with all sorts of flotsam and jetsam (I think I recognized a few pieces from Joel's equally inventive Great Expectations at Park Square last year), while the trunks, a ladder, and the frame of a tiny room are constantly moved on and off the stage with intricate and perfectly executed choreography. Unlike the Broadway production, in which the second act looked markedly different from the first, the island set is mostly the same as the ship set, but with a tropical blue-green color projected on the backdrop (lighting design by Marcus Dilliard). Sonya Berlovitz's shabby chic costumes complete the look of the design.

Theater Latte Da is not doing a "Broadway Re-imagined" project this year, but Peter and the Starcatcher fills that hole. It was already re-imagined on Broadway, meaning the kind of innovative low-tech physical theater style of storytelling rarely seen on Broadway. This makes it the perfect Broadway show for Latte Da to put their unique spin on, and the smaller theater and smaller cast really suits the piece and offers even more opportunities for creativity, which this terrific cast and creative team have capitalized on perfectly.

Peter and the Starcatcher continues through February 26 at the Ritz Theater in Northeast Minneapolis. It's a thrill for children of all ages, even those of us devoid of starstuff who have been forced to grow up.


*Plot summary adapted from what I wrote about the Broadway tour.