"The Royal Family" at the Guthrie Theater 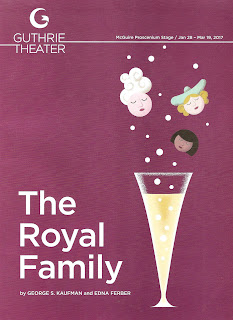 If you know me, you know that I'm a morning person who loves a 90-minute no intermission show - short, succinct, and to the point. The Royal Family, now playing at the Guthrie, is not that show. With its three acts and two intermissions, the show is pushing three hours. The good news is it doesn't feel nearly that long. In fact it's quite a delight to spend three hours with the wacky and extremely theatrical Cavendish family (as long as they're not your own). This 1927 Broadway play is a spoof of the real life Barrymore family of actors, a hilarious family comedy in addition to being an exploration of the sacrifices made by those in the theater. Directed by Rachel Chavkin (who also directed the new musical Natasha, Pierre, and the Great Comet of 1812, currently on Broadway*), the strong 15-person cast, made up of mostly local favorites with some national talent thrown in for extra spice, is a joy to watch. Continuing through March 19, The Royal Family provides plenty of laughter and a much needed escape.

It takes a minute to figure out the Cavendish family tree, so let me try to lay it out for you. Head of the family Fanny Cavendish hasn't acted for two years due to her failing health, while her deceased husband's portrait looms large over the family. Her playboy son Tony is off in Hollywood, acting in pictures, and returns home in a rush on the heels of yet another scandal. Fanny's daughter Julie is the toast of Broadway, while Julie's daughter Gwen is just starting her promising career. Fanny's brother Herbert is always on the lookout for the play that will make him a star, and his wife Kitty is determined not to be left out. Add into this family group longtime family manager Oscar, Julie's old flame Gil, her trainer McDermott, Gwen's beau Perry, and two hard-working servants, and you've got more than three hours of chaos and zany interactions! The three Cavendish women are at different stages in their lives and careers, but all of them are at a crossroads where they need to decide if a life in the theater is still what they want. They have good intentions of trying to live "a normal life," but once bitten by the theater bug, it's hard to be free of it (as I know quite well).

The entire play takes place in the Cavendish family's elaborate New York City home. The massive two-story set includes a grand stairway and a window looking out on the city. Shelves are filled with odd accoutrements of the theater, including masks, skulls, actual theater seats, and a suit of armor. As the play progresses, the back walls of the set are raised, revealing even more fascinating stuff stashed behind the scenes, creating a weird sort of meta-theater vibe. Similarly, there are some interesting things done with lighting effects, in which spotlights are visible on stage, perhaps saying that even when the Cavendishes aren't on stage, they're still on stage. Perhaps their whole life is a performance (scenic design by Marte Johanne Ekhougen, lighting design by Bradley King).

Clad in Brenda Abbandondolo's dreamy period costumes, the dreamy cast is great across the board, and is obviously having a lot of fun in these often large and comic portrayals. Tony-winner Elizabeth Franz is positively regal as Fanny, and Guthrie vet Michelle O'Neill makes a fantastic Julie. I had the pleasure of seeing Matthew Saldívar as Black Stache in Peter and the Starcatcher on Broadway (which, coincidentally, you can currently see over at the Ritz Theater in Theater Latte Da's delightful production), and it's such a treat to have him at the Guthrie as Tony, literally running around the stage and climbing all over the set. Other highlights in the cast include, well, everyone: Victoria Janicki as Gwen, David Darrow as Perry, Shawn Hamilton as the patient Oscar, Bill McCallum and Angela Timberman as Herbert and Kitty, Ricardo Vázquez in a few brief scenes as the trainer, Robert O. Berdahl as Gil, and last but not least, Charles Hubbell and Mo Perry as the trusty servants.

The Royal Family is a gorgeous production with a gorgeously talented cast, a hilarious play about a wacky family and that thing we all love best - theater.