"Hedwig and the Angry Inch" on tour at the Ordway 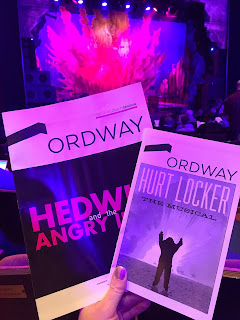 Friends, there's a very special and unique person sharing her story at the Ordway Center for the Performing Arts this week. I attended opening night of the Broadway tour of Hedwig and the Angry Inch on Valentine's Day, a day that's supposed to be about love but is often more about commercialism and feeling bad if you're not coupled off, or pressured to buy the right gift if you are. What better day to contemplate the very nature of love, both of others and more importantly, of oneself, with an East German transgender rock star? Hedwig shows us that it's OK to be authentically who you are, even if who you are doesn't fit into the neat labels and boxes society pressures us to fit into. As Ordway's Producing Artistic Director James Rocco notes in the playbil, "She's more than a woman or a man, but she really is her own gender - a gender that, by accident, defines individualism and the beauty of authentically being who you are." This idea of beautiful and worthy humanity no matter what body parts we have or whom we choose to love, is perhaps more important now than ever (as is pretty much everything, I'm finding). Hedwig is only in St. Paul for a week, do not miss this transformative theater experience!

John Cameron Mitchell created the character of Hedwig and along with Stephen Trask (music and lyrics) developed the piece in clubs throughout the '90s, eventually landing Off-Broadway in 1998. Mitchell also adapted, directed, and starred in the 2001 film which catapulted Hedwig into a cultural phenomenon, but she only received her Broadway debut a few years ago, in the person of Neil Patrick Harris, which I was fortunate enough to see.

The Broadway version of Hedwig, now on a national tour, plays out as a 100-minute concert and is almost a one-person show (although with great support from the four-piece band and Hedwig's husband Yitzhak). This allows Hedwig to speak directly to the audience, playing, flirting, and arguing with them. There is room for nightly changes and ad-libbing, and current pop cultural and political references have been added. Hedwig sings her songs for us and tells us the story of her life. And what a story! Born a boy in East Berlin to a cold German mother and an American GI who abandoned them, Hedwig later falls in love with another American GI and has a botched sex change operation (hence the "angry inch") so that she can marry him and move to America. Shortly thereafter she finds herself divorced and broke. She falls in love with a young man, nurtures him and writes songs with him, whereupon he leaves her and becomes a famous rock star using her songs. This leaves Hedwig a bit angry with her lot in life, but through the course of this one evening she's able to work through it and come to a place where she's not angry anymore, she's able to be herself and let those around her be who they are (including Yitzhak). It's a transformative experience for Hedwig and for those of us lucky enough to go on this journey with her.

Hedwig's concert takes place on the abandoned set of the fictional Hurt Locker: The Musical, which sadly isn't too far outside the realm of possibility with the direction Broadway has been going lately (check the floor of the theater as you arrive for discarded hilarious playbills). Through the course of the evening the set gets pushed aside as Hedwig makes way for her own show. In one particularly lovely moment, a scrim is lowered at the front of the stage and cartoons illustrate the beautiful mythology of "The Origin of Love." It's gorgeously staged so that it looks like Hedwig is part of the illustrated world. Much of the original creative team contributed to this production, including Arianne Phillips' gorgeous costumes and Mike Potter's fabulous wigs and make-up design. Because Hedwig wouldn't be Hedwig without her iconic look.

Many big names have stepped into Hedwigs gold platform boots, but it's really not about the actor. It's about Hedwig. And any actor who can serve this complex, larger than life, yet achingly vulnerable character, while putting their own individual spirit into it, is who you want to play the role. And Euan Morton does this brilliantly. I was a little surprised to see him at the post-show party, make-up washed off, wearing an average plaid shirt, not as tall as he seemed, and realize he's just a human. On stage Euan Morton is a god/dess, commanding the stage with the audience in the palm of his hand. Hannah Corneau is just as fantastic as Yitzak, a role that requires her growl and glower, then shine like a beauty queen with a voice that soars to the heavens.

Hedwig and the Angry Inch continues at the Ordway through February 19 only.


*Much of this post is adapted from what I wrote about the 2014 Broadway production.