"We Are Proud to Present" at the Guthrie Theater 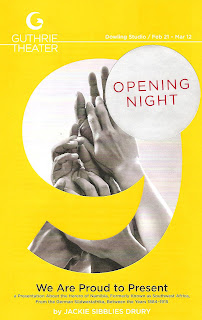 The ending of We Are Proud to Present, now playing in the Guthrie's Dowling Studio, is unlike anything I've ever seen in theater (for many reasons which I won't spoil for you here). It left me shocked, confused, and a little traumatized, but mostly it left me incredibly moved. It's such a powerful and important piece, forcing us to look at the long-lasting effects of colonialism around the world, its parallels with slavery in America, and how difficult it is to talk about racism. But even though the show leaves on a heavy and intense note, it's also really funny and innovative and theater-y too. It fools you into thinking it's a fun look at actors in rehearsal and then sneaks in some serious issues that soon become almost more than one can bear. Fortunately the Guthrie's Level Nine initiative includes what they call Community Engagement Activities, which often means a post-show discussion with the cast or creative team or experts on the subject. Take advantage of this - it's a wonderful opportunity to decompress and process what you've just seen, and begin a conversation.

From the moment you step off the elevator on the 9th floor into the golden-hued lobby of the Dowling Studio, you know you're in for a unique experience. The wall separating the lobby from the black box theater space is open. As you walk into the space, arranged as a thrust, you pass piles of old props and theater equipment that they must have foraged from the Guthrie's storage rooms (what fun that must have been!). Amongst the usual theater chairs are set mismatched chairs pulled from who knows where. I sat in a comfy worn armchair that I'm certain was on a Guthrie stage at some point, or likely many times. The actors are on stage well before showtime, milling about, welcoming the audience, helping them find seats, and casually chatting. The show eventually begins with the usual pre-show announcements by one of the actors, and they explain that they're giving a presentation and thank us for attending. At some point the presentation morphs into a rehearsal, with the house lights often fully up, giving it an informal feel that belies the utter seriousness of the piece (scenic design by Michael Hoover, lighting design by Alan C. Edwards).

As we learn from the power point presentation, the full name of the show, and also the show-within-the-show, is We Are Proud to Present: a Presentation About the Herero of Namibia, Formerly Known as Southwest Africa, From the German Südwestafrika, Between the Years 1884-1915. These six young actors (three black and three white, identified only as Actor 1 through Actor 6 in the playbill) are super excited to share this story with us. They give us a short overview of what happened in Namibia during these years, what Wikipedia calls "the first genocide of the 20th Century," in which 80% of the native Herero people were murdered by the German colonizers. It's a horrifying story to hear, and it's also disturbing that I've never heard of it, although it's certainly not a unique story in the history of the planet.

As we morph into the rehearsal part of the show (which is a bit unclear, but just go with it), the actors start improving various scenes of how they tell the story. Having never been in a rehearsal room (other than the occasional backstage tour), it was really interesting for me to watch the process of creating a scene from scratch, and fun to watch their struggles as well as their successes. The only historical evidence they have are letters from German soldiers home to their families, so there's a lot of "Dear Sara" longing for home. This doesn't sit well with some of the black actors, who are rightly concerned that the story has become mostly about "watching white people fall in love" (see Out of Africa or any number of Africa-set movies in which the main characters are white). The tension builds as they start to dig deeper into the experience of the Herero as they're forced off their land and into the desert on the other side of a wall that the Germans built. As the white actors play the role of the oppressor and the black actors play the role of the oppressed, things start to get painfully real as we begin to see the parallels between Namibia and America. The action frantically builds to that shocking ending I mentioned earlier, with the audience left in stunned silence.

The ending of the play doesn't really allow for the audience to show their appreciation to the actors, but I hope they know that their openness, vulnerability, and dedication to telling this story is greatly appreciated. From the post-show discussion I attended, it sounds like director Taibi Magar (a New York based director making her Guthrie debut) created a safe space for the cast to open up and share their own experiences with racism, and discuss how what's going on today relates to what the characters are going through and to what happened in Namibia. This beautiful cast, half of whom we've seen at the Guthrie before (Lamar Jefferson, Nike Kadri, and Sam Bardwell) and half of whom are new to the Twin Cities (JaBen Early, Nika Ezell Pappas, and Quinn Franzen), make themselves incredibly vulnerable as they act out these horrifying situations, but they're also really playful and natural as they portray actors enthusiastically trying to navigate and create a new piece.

In an interview in the playbill, director Taibi Magar says, "Maybe that's what this play is about - in conversations about race we continue to fail. Let's fail better. Let's rip it open. It's painful but... Sometimes you need to open a wound up so that it will eventually heal." That's exactly what this play does. It offers no solutions for racism, but it rips open the wounds that are obviously not healed (see also some recent plays The Highwayman, The Whipping Man, and Nina Simone: Four Women), rips them open in a painful way, but one that hopefully will help to engender conversation and eventual healing.

We Are Proud to Present continues at the Guthrie through March 12. All tickets are only $9 - go see this play, stay for the post-show discussion, and continue the discussion as we work together towards the healing of the deep wounds we carry.