"Hedwig and the Angry Inch" at the Belasco Theatre on Broadway

I've always known I would see Neil Patrick Harris on Broadway one day. I've loved him for over twenty years, from Doogie Howser, MD to How I Met Your Mother and various points and hosting gigs in between. But I didn't know it would be in such a special creation as Hedwig and the Angry Inch. John Cameron Mitchell created the character and along with Stephen Trask (music and lyrics) developed the piece in clubs throughout the '90s, eventually landing Off-Broadway in 1998. Mitchell also adapted, directed, and starred in the 2001 film which catapulted Hedwig into a cultural phenomenon, but she's only now receiving her Broadway debut. I've only seen the movie once, and the stage version once as well (at the Jungle Theater in 2008, for which Jairus Abts won an Ivey Award), but it's left a lasting impression on me. It's one of those rare pieces of art that once you experience it, it stays with you forever. And with Neil Patrick Harris stepping into Hedwig's high heeled gold boots, not an easy task but one he accomplishes with grace and ease, seeing Hedwig and the Angry Inch on Broadway was and will always remain a theatrical highlight of my life.

Hedwig and the Angry Inch plays out as a 100-minute concert and is almost a one-person show (although with great support from the four-piece band and Lena Hall as Hedwig's husband Yitzhak). This allows Hedwig to speak directly to the audience, playing, flirting, and arguing with them. There is room for nightly changes and ad-libbing (something Neil is a master at from his many hosting gigs), and current pop cultural references have been added. Hedwig sings her songs for us and tells us the story of her life. And what a story! Born a boy in East Berlin to a cold German mother and an American GI who abandoned them, Hedwig later falls in love with another American GI and has a botched sex change operation (hence the "angry inch") so that she can marry him and move to America. Shortly thereafter she finds herself divorced and broke. She falls in love with a young man, nurtures him and writes songs with him, whereupon he leaves her and becomes a famous rock star using her songs. This leaves Hedwig a bit angry with her lot in life, but through the course of this one evening she's able to work through it and come to a place where she's not angry anymore, she's able to be herself and let those around her be who they are (including Yitzhak). It's a transformative experience for Hedwig and for those of us lucky enough to go on this journey with her.

Hedwig's concert takes place on the abandoned set of the fictional Hurt Locker: The Musical (which sadly isn't too far outside the realm of possibility with the direction Broadway has been going lately). Through the course of the evening the set gets pushed aside as Hedwig makes way for her own show. In one particularly lovely moment, a scrim is lowered at the front of the stage and cartoons illustrate the beautiful mythology of "The Origin of Love." It's gorgeously staged so that it looks like Hedwig is part of the illustrated world. Much of the original creative team contributed to this production, including Arianne Phillips' gorgeous costumes and Mike Potter's fabulous wigs and make-up design. Because Hedwig wouldn't be Hedwig without her iconic look. 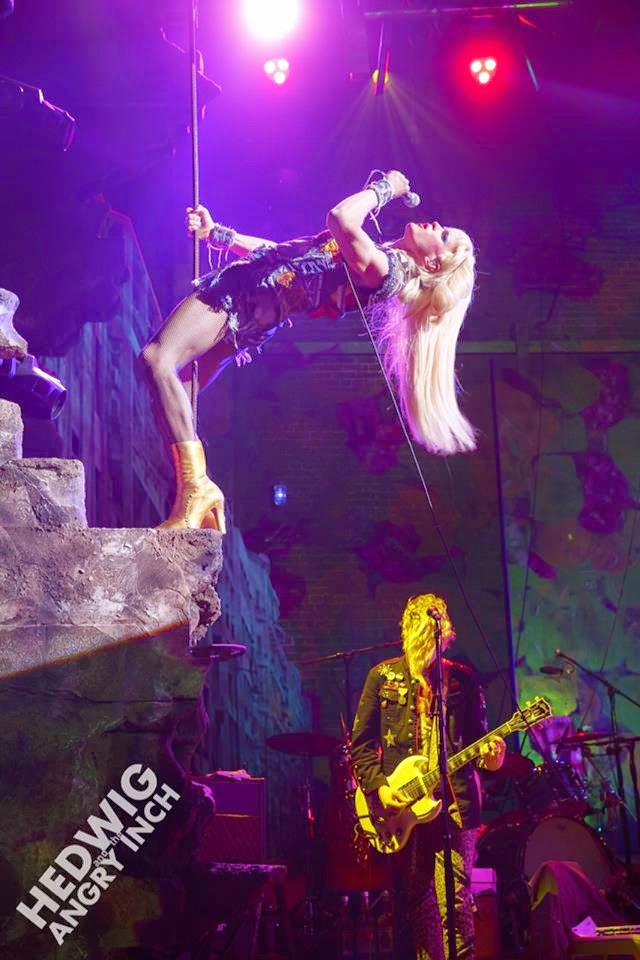 And now let me rave about Neil Patrick Harris. There are not enough superlatives to describe his performance. As an audience member, I was emotionally and physically exhausted at the end of the show, I cannot imagine how he feels. He pours everything he has into this performance. He is so strong and powerful, yet raw and vulnerable, funny and heart-breaking, emotionally and physically naked. It's an incredibly challenging role, vocally (he sings nearly every song of this punk-rock score), emotionally (conveying all of Hedwig's highs and lows), and physically (literally climbing all over the set), and he's fully committed to every moment. And this was only a preview (official opening on April 22), he's only going to get better as the run continues - more comfortable and playful and deeper into the character. I would love to be able to see the show again near the end of its run, but I feel so lucky to have seen it once that twice is just too greedy. Neil is once again hosting the Tony Awards this year, and is all but guaranteed to be nominated as well.

Breath
Feel
Love
Give
Free
Know in your soul
Like your blood knows the way
From your heart to your brain
Know that you're whole.
And you're shining
Like the brightest star
A transmission
On the midnight radio.
And you're spinning
Like a 45
Ballerina
Dancing to your rock and roll.