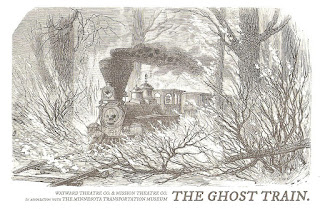 Wayward Theatre Company, the company that recently brought us an "innovatively imagined and well executed" Tartuffe at the James J. Hill House, is now partnering with Mission Theatre Company to bring us the deliciously fun and spooky Ghost Train in another one of 19th century railroad millionaire James J. Hill's buildings. The Jackson Street Roundhouse was once a maintenance facility for the Great Northern Railway, and now houses the Minnesota Transportation Museum. Filled with old trains and displays about the long ago era of train travel, it's perhaps the coolest space in which I've ever experienced theater. Or maybe that's just my inner Sheldon Cooper talking. But there's no doubt that surrounded by all of this historic equipment and memorabilia, it's quite easy to be transported back to the 1920s by this comedy/melodrama/thriller play and its terrific cast and detailed design.

A group of train passengers are stranded in a train station in the middle of nowhere, having missed their connection, with the next train not coming through until morning. There's the newly married couple on their way to their honeymoon (Vincent Hannam and Nissa Nordland Morgan), the slightly longer married couple in the middle of a spat (Michael Kelley and Andrea Rose Tonsfeldt), a woman with her parrot (Jane Zilch), and a mysterious and well dressed man (Tim McVean). The station master (Edwin Strout) tries to get them to leave so he can lock up, but there's nowhere to go. Even his story of the horrible train crash and multiple deaths 20 years ago, which has left the station haunted, doesn't convince them to leave. They're soon joined by a woman (Samantha V. Papke) strangely obsessed with the crash and the supposed "ghost train" that comes through at midnight, and the two men (Leif Jurgensen and William P. Studer) who are trying to convince her to let it go. All sorts of mysterious events and shenanigans continue until the story takes a turn, and the people we think we know aren't really who we thought they were. It all adds up to a fun, brisk, mysterious, often hilarious ride on the Ghost Train.

Everything about the design reminds you that you're in a 1920s train station, from the program that's fashioned after a vintage newspaper, to the pre-show announcement that the train is leaving the station and the sound effects that make it feel like a train is rumbling through the station (sound design by Peter Morrow), to the spot-on character defining period costumes (designed by Krista Weiss), to the shabby chic train station set, full of authentic looking travel stuff, so realistic that it almost feels like a permanent part of the museum (technical director Dietrich Poppen). Bonus: while the museum isn't technically open, the audience is free to wander among the darkened exhibits before the show and during intermission, which only adds to the slightly creepy and authentically retro feel of the show.

The 12-person cast is really great (although sadly non-diverse) under the clear direction of Sarah Nargang, who sets the perfect tone of melodrama and comedic terror which the cast fully commits to. You might not have heard any of these actors' names before, you might not have seen them on the big stages in town, but they're all so present, so in-the-moment, so committed to the storytelling that they're a joy to watch, and are obviously having a ton of fun themselves. These are the kind of artists, Wayward and Mission are the kind of companies, and Ghost Train is the kind of theater that makes the Twin Cities' theater community so deep, rich, and great. It's a wonderful example of the fact that you can find great theater not just on the big stages in the huge houses, but also on a tiny, chilly, makeshift stage in a train museum.

This Ghost Train will leave the station for the last time on April 15. If you're a fan of fun, imaginative, well executed, site-specific theater, don't miss it! Tickets start at $15 and include a number of add-on activities such as dinner and a vintage bus tour.