"The Secret Garden" at Artistry 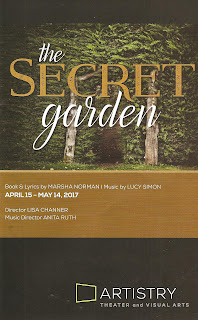 The Secret Garden was my favorite book as a child (beside the Little House series, with which I was and maybe still am obsessed). I remember finding it magical, and wishing for a secret garden of my own, perhaps because I connected with a serious and solitary little girl who liked the outdoors. A few weeks ago I started re-reading this beloved childhood classic that I haven't touched in 30 years in preparation for seeing Artistry's production of the 1991 musical adaptation. I haven't finished it yet (I spend too much time at the theater and not enough time reading), but that brooding and magical feeling is familiar. The book is an introspective story with few characters that doesn't scream "Broadway musical!" But the creators (book and lyrics by Marsha Norman and music by Lucy Simon) have done a wonderful job of adapting it and making it something new, while still staying true to the heart of the original. It's a heart-warming tale with a hauntingly beautiful score, brought to life by Anita Ruth's always thrilling pit orchestra and this dreamy cast that is vocally one of the best I've ever seen at Artistry.

The story begins when young and disagreeable Mary Lennox is left orphaned in India after her parents and everyone she knows dies of cholera (as they say in another musical, "sometimes your whole family dies of cholera"). She's sent to live with her uncle Archibald in Yorkshire, who was married to her mother's sister Lily, who died tragically and mysteriously ten years ago. You see, most of the characters in this musical are dead. But they're still on stage - we see Lily as well as Mary's parents and Indian servants as part of a sort of ghostly Greek chorus. They're seen in flashbacks, and also narrate the story in song. This is a clever way of fleshing out an introspective story of a solemn and angry little girl that doesn't immediately translate to the stage. Several characters are added and others are fleshed out, with plot points added, changed, or elaborated upon to create more drama. The result is that the musical is a different animal from the book I remember, but just as lovely and haunting.

Speaking of lovely and haunting - this cast! The most lovely and haunting is Jennifer Eckes, who opens and closes the show as the ghostly Lily with her beckoning call "come to my garden." She leads the beautiful ghostly chorus that also includes Siri Hammond and Eric Sargent (who I'm please to report can still reach those lovely high notes after almost a year of playing Johnny Cash) as Mary's parents. Among the living, Uncle Archie is played by Ben Johnson, a member of the stunning cast of All is Calm which tells you everything you need to know about his voice, but he also creates a sympathetic and deeply hurt character who learns to open his heart again. He's well-matched in brother/frenemy/duet partner Taras Wybaczynsky, Jr., a welcome newcomer to the Twin Cities theater scene whom I look forward to seeing on stages around town in the coming years. Gracie Anderson is perfectly cast as Martha, Mary's no-nonsense servant/companion, warm and funny and not putting up with any of Mary's moods. Seth Tychon is also great as Martha's brother and Mary's first friend Dickon, with great stage presence and a strong voice, although I had a little harder time understanding his Yorkshire accent. Last but not least are the kids, who are really the stars of this show. Gavid Nienaber is every bit the spoiled and petulant child that is Mary's cousin Colin, and as Mary herself, Caitlyn Carroll is a wonderful leading lady, fitting right in with all the gorgeous voices in the cast, with a consistent English accent to boot!

I'm afraid I've already overused the word lovely, but the design of this production is also, yes, lovely. Ed Gleeman's costumes are dreamy and romantic, Annie Henly's scenic design captures the forlorn garden coming into colorful bloom again, highlighted by Mary Shabatura's lighting design (which includes charming shadow puppetry). James Kunz's choreography matches the emotions and musical styles of the score, at times dreamy, at times reflecting Mary's origins in India, at times Yorkshire folksy, with some innovative use of fabric to create the mysterious hallways of the mansion.

Whether you're familiar with the book, or the musical, or neither, Artistry's production of The Secret Garden is musically gorgeous, with a lot of heart to the sweet story of connection, healing, and new beginnings (continuing through May 14).