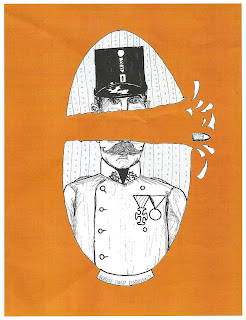 "Warn the Duke!" calls the clairvoyant little boy in the musical Ragtime. Those who paid attention in their high school history class know that he's referring to Archduke Franz Ferdinand, heir to the Austria-Hungarian crown, whose assassination in 1914 started World War I. It turns out the story is a little more complicated than that, and Sheep Theater's new play The Assassination of the Archduke of Austria-Hungary Franz Ferdinand tells the story fairly historically accurately (from what Wikipedia tells me, my high school history class being a long time ago), but with modern language and humor. The result is part history lesson, part reflection on the current state of events, part tragedy, and part wacky farce. Judging by the sold out house last night, Sheep Theater (they do "original plays with an emphasis on classically epic stories that highlight the deranged confidence of humanity with sincerity and honesty"), has a loyal following, deservedly so, and might want to consider extending their runs past the usual handful of shows. This one closes tonight, sorry folks! Watch their website and Facebook page for your next opportunity to see this uniquely clever and funny company.

Sheep employs their usual writer/director team - Joey Hamburger (who also plays one of the assassins) and Michael Hugh Torsch (with a small but memorable cameo as Germany's Kaiser Wilhem II). The 90-minute play is bookended by the assassination, and in between we see what led to it and learn a bit about the soon to be murdered Archduke. Basically the Slavic people didn't want to be under Austria-Hungarian control, and a group of Serbians therefore plotted to kill the Archduke on his visit to Sarajevo. The play lays out all of the players and maneuvering in a fairly easy to follow way, mixed with scenes of Franz at home and at work. The two stories converge in Sarajevo for their tragic end.

Although there is much humor and shenanigans, the humanity of the characters is emphasized in such a way that it's hard to know which side to root for. Of course it's not right for the Slavic people to be governed by an outside entity that doesn't have their best interests as heart, but the Archduke seems like a genuinely good guy. As portrayed by the affable Michael Rogers, Franz comes off as a regular, good-natured fellow, one who loves his wife so much that he married her despite the fact that, due to her non-royal lineage, neither she nor their children could inherit his titles. In Sarajevo, he gives a heartfelt speech about the divisiveness within a country that speaks directly to today, which only serves to make his death feel more tragic, however noble the assassins' cause may have been.

As with most political historical stories of war, there aren't a lot of women involved (at least not in the way these stories are usually told). This production remedies that imbalance a bit by casting women in some of the male roles, including Tara Lucchino as the assassin and company member Iris Rose Page as a mailboy/newsboy/intern. Everyone in the strong ensemble really commits to the comic sincerity of the piece. The projections of time and place are helpful, and also sometimes contain a joke. The live musical accompaniment by John Hilsen provides a soundtrack for the story.

Like the other Sheep Theater shows I've seen, Franz Ferdinand is smart, funny, engaging, and relevant. This new-ish company is one to keep your eye on.