"Side Show" by Chameleon Theatre Circle at Ames Center 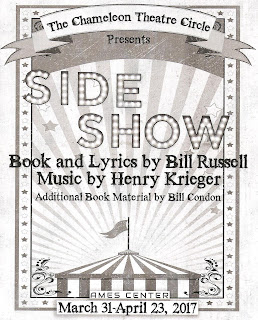 The 1997 Broadway musical Side Show is a bit of a cult hit among musical theater nerds, although it closed after just 91 performances in its original run. I saw it at Park Square Theatre, but it was 15 years ago so I remember next to nothing about it, other than it's based on the true story of conjoined twins and vaudeville stars Daisy and Violet Hilton. I was eager to see it again, so it was the perfect opportunity for my first visit to Chameleon Theatre Circle way down south in Burnsville. It's a fascinating and tragic story of fame and abuse, but the musical's creators Bill Russell (book and lyrics) and Henry Krieger (music) have turned it into one of true sisterhood, perseverance, and acceptance of oneself. I very much enjoyed Chameleon's production, which brings out all the weirdness as well as the heart of the story.

We meet Daisy and Violet in a side show in Texas in the '30s, surrounded by the other usual circus "freaks" such as a bearded lady and a dragon man. A couple of Vaudeville men, producer Terry and song and dance man Buddy, come to see the twins and, inspired by their talent, help them to break free of their abusive guardian Sir and become stars on the Vaudeville circuit. But things get complicated when Daisy and Violet fall for Terry and Buddy, respectively, only to find out the men are not who they seem, and like everyone in their lives, are more concerned with what the twins can do for them than their true happiness. After wondering "Who will love me as I am?" (a universal query not exclusive to conjoined twins), Daisy and Violet discover that despite their differences, they will always be there for each other. 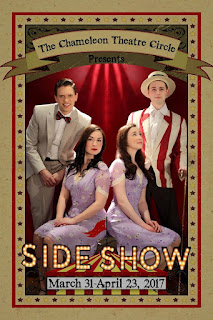 As Daisy and Violet, Julia Ennen and Anna Larranaga anchor the show with strong performances. They're well-matched, aesthetically and vocally, yet bring out the very different personalities of the two women. The harmonies they create in their many duets are beautiful and stirring. Other highlights in the large cast, all of whom do good work with multiple roles, include John Goodrich as the smarmy Sir, Mike Tober as Terry (an understudy who ably filled in the night I saw the show, with the voice of a crooner), and Logan Bitz Daum as the charming Buddy.

Chameleon performs in Ames Center's black box theater* and despite the craziness of the dance competition going on in the main theater and lobby, once inside the theater no outside sound could be heard. Unfortunately the sound that could be heard was a bit off, with mics going in and out and being too loud at times (in a small space like that I wish they'd do it without amplification, or at least less amplification). But the cast gamely soldiered through any sound issues, and hopefully they'll work that out as the run continues. A simple set of a small stage with a curtain and plenty of space in front of it works well for the show. The fantastic and often fantastical costumes (designed by Mariah Lamkin) help to define the characters and period, and I'm still not sure how they did the twins' matching dresses that are attached at the hip, except when they're not (not to mention the quick changes!).

Side Show continues through April 23. Check it out if you're in the southern metro, or are interested in seeing this rarely produced cult hit musical.


*Chameleon Theatre Circle will no longer be performing at the Ames Center after this season concludes. Read the statement on their website for more information about this decision and watch for updates on a new location.