"The (curious case of the) Watson Intelligence" at Park Square Theatre 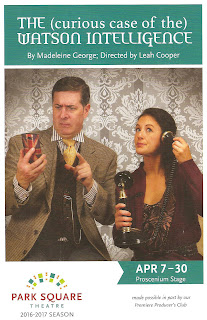 "The world is filled with people who could ruin me with love." So says a character in The (curious case of the) Watson Intelligence, currently playing at Park Square Theatre. And that's really what the play is about, although it's also about technology and artificial intelligence and several famous Watsons throughout history. But "about" is a difficult word with this play; it's difficult to explain or describe. But what it is is funny, imaginative, thought-provoking, touching, and yes, curious.

In the play, the lives of three historical Watsons are intermingled with a fictional modern-day Watson who bears a resemblance to all of them (all played by the always wonderful H. Adam Harris). There's Dr. Watson, famous sidekick to famous detective Sherlock Holmes; Thomas Watson, assistant to Alexander Graham Bell and subject of the first telephone communication, "Mr. Watson, come here, I need to see you;" and the IBM computer that won Jeopardy. The fourth and fictional Watson is a computer tech who gets involved in unexpected ways with city auditor candidate Merrick (Adam Whisner) and his ex-wife Eliza (Kathryn Fumie), who worked on the IBM Watson and is developing her own version. We also see alternate versions of Merrick and Eliza in Sherlock Holmes' time, when Eliza visits Dr. Watson to investigate some mysterious goings-on related to her husband's technological inventions. Both marriages are strained, and in both cases Watson thinks he can give Eliza what she needs. But she's convincee that her best companion is the computer she's creating that always has the perfect response. Or is it? Hence the opening quote.

This lovely cast is mostly new to the Park Square main stage. I've been a fan of Adam Whisner's heartfelt and often heartbreaking performances for a number of years (see this and this in particular), and it's great to see him on a big stage at a big theater. Kathryn Fumie has also done some great work on smaller stages and is now deservedly getting her "big break" on a big stage. And everyone knows and loves H. Adam Harris from many theaters around town, but it's nice to see him play a romantic lead for a change. I don't think we ever see the three actors together on stage. The play is a series of well-constructed and well-acted two-person scenes, with a few monologues thrown in, that really allow these actors to dig into their characters.

There are a lot of moving pieces in this show, literally and figuratively, with sets (Lance Brockman), costumes (Kathy Kohl), lighting (Michael P. Kittel), and sound effects (Katharine Horowitz) all coming together smoothly to tell the story. Even the scene changes are entertainingly choreographed and fun to peer at in the dark as the mysterious figures move things around. With its brick walls, copper accents, and large windows, the set works in the 19th, 20th, and 21st centuries. Similarly, the steampunk chic costumes easily transform from 19th Century to modern day, with a little help from the imagination. Audio clips related to the various Watsons play during scene changes, and shadow play also used. It's sort of an odd and delightful mish-mash of media.

The (curious case of the) Watson Intelligence is a bit of a puzzle; it takes a minute to figure out who these characters are and how the scenes are related. But it's a lot of fun putting the pieces of the puzzle together, and brings up some interesting ideas of the role of technology in history, our world, and relationships.