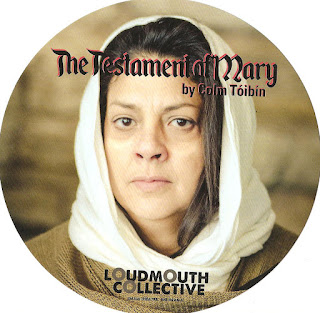 What if the inspirational and world-changing story of Jesus was told by his mother, rather than his followers? Would she be just as reverential of the man that Christians believe is the son of God who died for our sins? Or would she be grieving and angry at the loss of her child? Irish playwright Colm Tóibin explores that idea in his one-woman play The Testament of Mary. Loudmouth Collective opens their production of this powerful and thought-provoking play tonight, and like all of their work, it's short, intense, well-executed, and runs for two weekends (eight performances) only.

Adlyn Carreras portrays Mary convincingly. She looks the part with the iconic blue scarf draped around her head (costume by Amber Brown), and more importantly she inhabits the weary, grieving, and angry mother with realism and grace. In one long monologue that lasts just over an hour, Mary fields questions from imaginary visitors who want to hear about her son's life and death. Refusing to say his name, Mary reluctantly tells her version of the story. She talks about her fears for her son, pleading with him to come home out of harm's way, witnessing his death, and fleeing from it. From a mother's viewpoint, the pain overshadows the glory.

New York based director Jessica Rose McVay lets the story unfold without rushing, and keeps Mary moving around the stage, sewing, eating, washing clothes, and making notes on paper, as if to record her own gospel. The storytelling is also aided by mood-altering lighting and the eerie sound design that tells us if we're in a busy market or a dream. The simple and rustic set completes the cohesive design (lighting design by Mary Montgomery, sound design by Katharine Horowitz, and scenic and prop design by Sarah Brandner).

For those of us who were raised with one version of the story of Jesus, it's fascinating to look at it in a different way, and to witness Mary as nothing more and nothing less than a grieving mother of a child who died tragically, no matter the reason others assigned to it. For Christians, and especially for Catholics, Mary is a saintly symbol of womanhood, but this play re-imagines her as more complex and human.

The powerful and affecting The Testament of Mary continues at Open Eye Figure Theatre through next weekend only.