A Reading of the New Musical "Delgadina" at Strike Theater 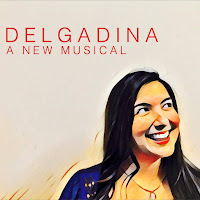 Last week was a great week for readings. First, I saw the second play in the Playwrights' Center Ruth Easton Series (continuing the first Monday/Tuesday of the month through April), then I saw three readings in the History Theatre's "Raw Stages" series (the last one is today at 2), and finally, I concluded my the week of readings with a new musical written by Max Wojtanowicz (book and lyrics) and Michael Gruber (music and additional lyrics). Based on a Chilean folk tale, Delgadina is ostensibly a musical for young people, but this not-so-young person with no particular interest in "children's entertainment" found it utterly delightful. There are two more readings of this great new work, Sunday and Monday at 7 pm at Strike Theater in Northeast Minneapolis. I highly recommend checking it out if you're interested in new works of music-theater being created right here in #TCTheater (free, no reservations necessary, more information here).

This is Max and Michael's fifth musical collaboration, having written several Fringe musicals (Fruit Fly, the two Shelly Bachberg spoofs, and Ball), and they've really hit their stride with this one. Delgadina is a charming story about a sweet and happy young girl who is forced to grow up through hardships, encountering talking snakes and magical gold and such along the way. Brought to life by a terrific six-person cast (including Suzie Juul as the title character and ensemble members Emily Madigan, James Rodriguez, Joy Dolo, Ricardo Vazquez, and Susan Hofflander, playing multiple characters and acting as narrators in turn), it's a story that feels epic yet succinct in 75 minutes. The score is fantastic, with a range of musical styles including a Chilean influence, and a three-piece band led by Jill Dawe that includes guitar and marimba (or some such instrument).

Delgadina feels almost like a Disney princess story, but more modern and smart and funny, and not all about marrying a prince. Even though it's only a reading, with actors holding scripts, it's a completely satisfactory experience. But I also look forward to the magic of a full production at some point in the future.

Early in the 2018 #TCTheater year, seeing all of this creative and interesting new work makes me very hopeful and excited for what's in store.