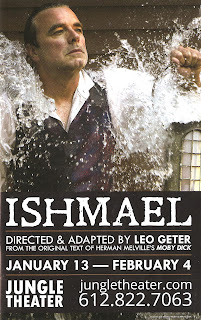 "I wanted to bring you a rollicking tale for a long winter's night."
- Sarah Rasmussen, Artistic Director

"This is a memory play. About a great adventure and the great wounds it leaves behind."
- Leo Geter, Writer and Director

Ishmael, a new adaptation of Herman Melville's Great American Novel Moby Dick, began as a Minnesota Fringe Festival show in 2015. Somehow I missed it (I only saw 44 shows that year), and I'm also not familiar with the source material (my first experience with it was Theater Coup d'Etat's epic adaptation a few months ago). But even if you did see the Fringe show, or have read the book, you haven't experience Moby Dick quite like this. Since the original production, writer/director Leo Geter (who pulled all of the dialogue directly from the book) has added music, and the result is an inventive and unique piece of music-theater storytelling.

Storytelling is the first word that comes to mind. As the playwright notes, this is constructed as a memory play (similar to the narration in the novel, I gather). The play begins and ends with the character of Ishmael (confidently and consistently played by Jack Weston) in a classroom, and in between he tells us his story. The playwright has condensed the epic story into just 90 minutes in a way that doesn't leave anything lacking (at least not for someone unfamiliar with the book). We still get Ishmael's craving for adventure, the friends and crew members he meets on board the whaling ship, and most importantly, the revenge-focused Captain Ahab. Jack Weston plays all of these characters, with just a change of voice and physicality. It really does feel like the best storyteller enacting a pivotal experience in his life.

But this Ishmael is not a one-man show. Three musicians are onstage and not only add greatly to the mood and tone of the story, but also function as sounding boards for Ishmael, sometimes sitting in as other characters, even if they don't have any dialogue. Two members of the local bluegrass band Pert' Near Sandstone (Kevin Kniebel on banjo and Nate Sipe on fiddle), along with Jim Parker on guitar (and clogging!), form the Ishmael band and play their original score. A score that feels organic to the time and place and storytelling, in a lovely seamless flow of music and story.

As per usual, the design team at the Jungle creates the perfect setting for this inventive storytelling. Sarah Bahr's scenic and costume design is simple but evocative - wooden masts, a few benches moved around to form different arrangements, and a large flowing white sail. The lighting of the backdrop varies from sunrise to dark of night, and the sound blends well between the live music and recorded effects.

Ishmael feels like a Fringe show in its inventiveness, but raised to a new level with the addition of the music and top-notch design elements. This new look at an old story continues through February 4.