"Rhinoceros" at Theatre in the Round 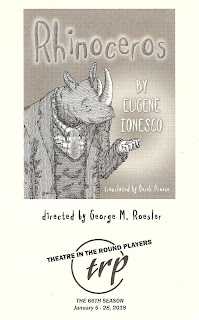 What a year it's been, friends! How fitting that my first #TCTheater show of 2018 is the same as one I saw in January last year, and it's just as timely and relevant as it was then (even though it was written nearly 60 years ago). My first experience with Eugene Ionesco's absurdist masterpiece Rhinoceros was 7th House Theatre's "pop up production" last year, which they intentionally premiered the night of the inauguration of the 45th president. Now a year has passed, and this absurd, funny, yet deadly serious little play, now playing at Theatre in the Round, resonates in whole new ways. Written in response to the rise of Fascism in pre-WWII Europe, Rhinoceros reminds us to be wary of large lumbering beasts running through our town and destroying everything we've worked so hard to build. Theatre in the Round's production makes great use of their in-the-round space and a wonderfully committed cast to entertain while also disturbing. As I wrote last year, "It would be terrifying if it weren't so funny. It would be funny if it weren't so terrifying."

Rhinoceros takes place in a little town that could be anywhere, with modern costumes and props (including phones and laptops) setting it squarely in the present. We follow the story through an everyman type named Berenger, who drinks a little too much but is otherwise unremarkable. Nothing much happens as the town citizens gather at a little cafe, until a rhinoceros inexplicably runs through town, a little cat as the first casualty. People in the crowd argue about what they saw, and then it happens again. The next day at an office, the argument about what really happened continues, until one of the employees shows up for work as a rhinoceros. More and more people begin to turn into the rhinoceroses, even Berenger's good and sensible friend John, before his very eyes. Soon Berenger and his crush Daisy are the only humans left, until Daisy decides to give in and join the other side. Berenger is soon surrounded by rhinoceroses and has lost all sense of what's right or normal. As he's overwhelmed, he cries out, "I am not capitulating!" But what can one person do against a herd of rhinoceroses?

Pretty absurd, right? That's exactly the point. But despite the disturbing themes, it's really quite an amusing and entertaining play, as the citizens debate about topics silly and profound. Director George M. Roesler has the terrific 11-person cast moving around the space in interesting ways, always active and immersed in something even if not part of the main action of the play. Sometimes there are multiple conversations going on at once, sometimes the ensemble members are intently watching the main conversation, sometimes they're doing something seemingly unrelated. But always intentional. Highlights in the cast include Lucas Gerstner, totally believable and relatable as the affable schlub Berenger, who gets ever more frantic as his everyone around him turns into a rhinoceros; Clint Allen as John, the Felix to Berenger's Oscar, very convincing in John's descent into rhino-ness; and Jane Catherine Sterk as the charming and somewhat ditsy Daisy. The rest of the ensemble (which includes Austan Peterschick, Charles Numrich, Erin Granger, Hannah Halvorson, Jay Urmann, Kelly Lynn Regan, Laura Hoover, and Phil Holt) play multiple roles large and small, all specific and necessary and entertaining.

The rhino conversion is done in a cool way with massive rhinoceros masks of varying sizes and shapes (designed by Kimberly L. Lawler). John is the first one to don such a mask, bellowing around stage like someone literally crawling out of their skin, and soon the entire ensemble is wearing rhino masks. They wander wordlessly across the stage and through the audience, surrounding us with rhinocerosness. Because you never know when there might be a rhinoceros sitting next to you.

A modern interpretation of a classic and still relevant play. I'd say 2018 #TCTheater is off to a great start.

Rhinoceros continues at Theatre in the Round, Minneapolis' oldest theater, through January 28, with a very reasonable ticket price of $22 (click here for more info).