"Into the Woods" at Lakeshore Players Theatre 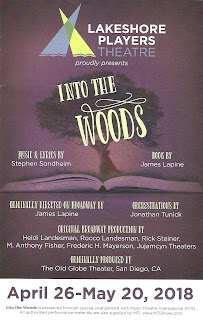 Lakeshore Players Theatre has been the community theater in White Bear Lake for 65 years. Even though I'm kept very busy by professional #TCTheater, I'm a little ashamed to admit I've never attended an LPT show despite living in the Northeast metro. This spring, they're opening a brand new performing arts facility just off of Highway 61 in downtown White Bear Lake, which speaks a lot to their audience and donor support, as well as to their commitment to continuing and furthering their legacy. This new building, combined with the fact that their first show in the new space is one of my favorite Sondheim musicals, convinced me to make the short drive to finally check them out. I was impressed not only with the new facility, but also with the quality of their production of Into the Woods. Sondheim isn't easy for professional theaters, much less community theaters, but there were zero cringe-worthy moments and they really pulled off this tricky show remarkably well.

Into the Woods is a mash-up of familiar fairy tales, but with a twist. We have Cinderella with her handsome prince and missing shoe, Jack and his beanstalk that leads to a kingdom of giants, Rapunzel with her unusually long and strong hair, and a little girl in a red cape going to visit her Granny. Tying these stories together is a Baker and his Wife, who long to have children but were cursed by their neighbor, who happens to be a witch. The witch promises to reverse the spell if the couple completes a series of tasks, which will allow her to become the beautiful young witch she once was. Everyone heads into the woods to accomplish their task, where their stories intersect. At the end of the first act, everyone seems to have accomplished their "happily ever after." But the second act shows us what happens next. Happiness is complicated, actions have consequences, and things are not always what they seem. It's a little like growing up; as children we're told these fairy tales, but when we grow up we learn that life is not like fairy tales, it's complicated and messy, and "sometimes people leave you halfway through the wood." But the good news is, "no one is alone," not even witches and giants.*

In the spacious and comfortable auditorium of Hanifl Center for the Performing Arts, so new it still smells like new construction, it's easy to get lost going Into the Woods. The a design continues even into the lobby and bathrooms with bird and nature sounds playing on the building's sound system. The set is extremely clever and playful, dominated by oversized story books that open like pop-up books, complete with tabs that say "pull this" or "open here." Each fairy tale has its own book, and Cinderella's book opens to three different pages for three different settings. Costumes are fun and colorful, but I would like to tell all of the theaters that if you can't afford good wigs, try to use the actors' real hair if possible. Nothing's more distracting than a bad wig. (Scenic design by Shy Iverson, costume design by A. Emily Heany.)

The 18-person cast is consistent throughout, with no weak links among them, and kudos to director Christopher Teipner for keeping the large cast organized and scene changes moving smoothly (at times there is no break for applause after songs, which I love). Highlights in the cast include Gabriel Gomez and Theresa Rotter as the Baker and his wife, both natural and likeable; Bethany Jackson as the sweet-voiced but strong Cinderella; Kara Taft, delightfully over-the-top as the witch; Alex Johnson as the sweet young Jack; Jessica Halverson as an enthusiastic Little Red; and Cody Olson and Austin Lewis as the preening princes.

The theater has an orchestra pit, but it's pretty sparsely populated for this show, just three musicians, all playing keyboards (plus percussion). As a former band geek, I can't help but wish for a brass or wind instrument or three, especially for a Sondheim score. But what's there sounds good, if not very lush, and Music Director Natalie McComas Gallacier has done a great job with her cast on this difficult score.

Into the Woods continues at the shiny new Hanifl Performing Arts Center in White Bear Lake through May 20. Check them out if you live in the area. I'm excited to see what's in store for Lakeshore Players Theatre's first full season in this beautiful new space. Now that this huge accomplishment is achieved, I would love to see them work towards more diversity in casting, programming, and audience.


*Plot summary borrowed from what I wrote about the production at Lyric Arts a few years ago.