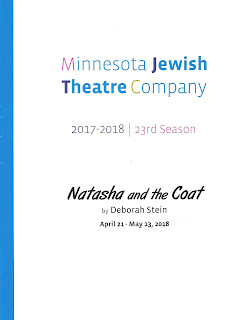 For the final show of their 23rd season, Minnesota Jewish Theatre Company is bringing us the world premiere of a new play. LA-based playwright (and Playwrights' Center affiliated writer) Deborah Stein's Natasha and the Coat is an engaging look at a Hasidic Jewish family in the neighborhood of Williamsburg in early 21st Century Brooklyn, as well as the garment industry in that neighborhood. It touches on themes of immigration, gentrification, and how to maintain one's culture and traditions while still functioning in modern American society. While it could use a little tightening up (it's lacking in momentum in parts, and feels too long at 2.5+ hours), the likable and believable cast make it worthwhile.

Our view into this world is through the title character, Natasha, who begins working as an intern for Felicity in her trendy Williamsburg shop that sells and rents vintage clothing. When Natasha accidentally spills coffee on a 1920s sea otter fur coat, she takes it to the neighborhood dry cleaner "Mordy and Sons" for emergency repair. They do such an amazing job with the coat that Felicity notices it, and remarks that it's been revived, like it's brand new. But Natasha won't admit her mistake and claims that she just took it home and wore it. Felicity asks her to do the same thing with many other items in the shop, which leads to the unbelievable premise that both are pretending something in Natasha's sweat is reviving the clothes, while she secretly brings them to Mordy. It seems silly that Natasha wouldn't just admit she was taking the clothes to a dry cleaner, but it sets up the culture clash when Natasha becomes friends with Mordy's son Yossi, who begins to dream about what it would be like to wear regular clothes, go to a bar, watch TV, chew gum, and do other things that his strict traditions and parents don't allow. Yossi and Natasha are both changed by their friendship, and come to a deeper understanding of themselves, their culture, and their life choices.

Director Miriam Monasch has assembled an excellent five-person cast. A familiar face on the MJTC stage, the always great Miriam Schwartz is a wonderful Natasha. Making his MJTC debut is Avi Aharoni, a natural as the sweet and charming Yossi. The two of them are quite believable as the sweetly unexpected couple. Kim Kivens is at her best Devil Wears Prada as Felicity, Muriel Bonertz is every bit the strict but loving mother, and Charles Numrich is lovely as Mordy.

In a play about the fashion industry, the costumes need to be on point, and they most definitely are, thanks to costume designer Lisa Conley. Each character has a specific style, from the traditional dress of Mordy and family, to Natasha's modern chic wardrobe (including an evening dress with jeans and heels, and a gorgeous beaded brocade jacket, see above), to my favorite - Felicity's yummy array of retro '50s-style yet modern dresses, each one worn with a crinoline. Be still my heart! Felicity's shop is filled with vintage dresses and coats that all look beautiful and authentic; I'm not sure whether to credit the costume designer or properties designer Liz Josheff Busa, but there are some incredible finds on that rack. And speaking of the rack, Michael Hoover's set cleverly converts from the chic clothing boutique to the family dry cleaner simply by spinning the two clothing racks (black and white traditional clothing on one side, colorful vintage items on the other), while the basic gray background works for either as the counter is rotated and different props brought out.

It's always great to see new work premiering right here in #TCTheater. And while I had a few quibbles with this one, there is a lot to enjoy and appreciate about Natasha and the Coat (continuing at the Highland Park Center Theatre through May 13).