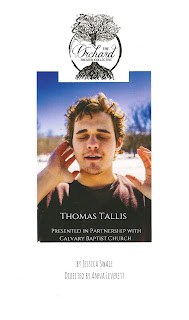 The long, complicated, sordid tale of the English monarchy is the source of much drama and many many plays. Wars, illegitimate heirs, beheadings, oh my! The play Thomas Tallis looks at it from another side, through the life of a man who was a surprising constant through some of the most tumultuous changes in the monarchy in the 16th Century, from Henry VIII through Elizabeth I. As composer for the Church of England, Tallis worked under four different monarchs with differing religious and musical tastes, and somehow survived to the ripe old age of 80 with his head still attached to his body. Jessica Swale's sparse play doesn't get into too many details about the composer or those he worked for, but it does paint a portrait of the artist, the era, and the importance of music. New young theater company Orchard Theater Collective has chosen this play as their second work, staging a lovely and haunting production in Calvary Baptist Church.

The play may be called Thomas Tallis, but it's as much about his priest friend as it is about the composer. The story begins when Henry VIII separates the Church of England from the Catholic Church as ruled by the pope in Rome (so that he can divorce his wife for someone younger and more fertile, natch). This does not bode well for the Catholics living in England, and here's where the stories of the composer and the priest diverge. The composer adjusts his compositions to the desires of each successive monarch, finding the beauty in each style of music, and somehow avoiding the religious controversy. The priest goes into hiding, is eventually found and arrested, and refusing to deny his faith, is executed.

All of this happens in a quick 75 minutes, and at times I found myself wanting to know more of the story. But what's there is quite lovely, and the choral music, with a small choir performing Tallis' compositions (with music direction by Michael Pearce Donley), is hauntingly beautiful, especially in the space of a church. "Music and silence. They are salves to our soul." Both the music and the silence are gorgeous in that space, as is the spoken dialogue, unamplified but echoing off the high ceilings.

Under director Anna Leverett, the small cast does a great job playing multiple roles in the multiple stories (including all four monarchs) and keeping them all clearly defined and different. Elizabeth Efteland is as regal as a couple of queens as she is warm and earthy as Tallis' wife. Ben Shaw is excellent as both the ridiculously arrogant King Henry VIII and the humble and persecuted priest. As the title character, Damian Leverett has such a look of radiance and wonder on his face as he listens to the music and the silence, and beautifully embodies the constant composer, who always has his music even when everything else is changing around him. Also playing multiple roles and creating beautiful sounds in the choir are ensemble members Emily Garst, Grace Warren, Jim Ahrens, Joe Allen, Kayla Peters, and Naomi Karstad.

Orchard Theater's last play was A Doll's House in the James J. Hill House, and this sort of site-specific intimate setting works well and creates an experience that feels more immediate, raw, and real than sitting in a proscenium theater with distance between the play and the audience. There's no distance here as we're surrounded by the music, words, actors, and silence of the piece.

This play is a great argument for the separation of church and state, because it shows the disastrous results when the state dictates the religion of its citizens and doesn't allow for people to have diverse beliefs. Perhaps a good thing to keep in mind right now.

Thomas Tallis continues through May 5 (more info and tickets here).