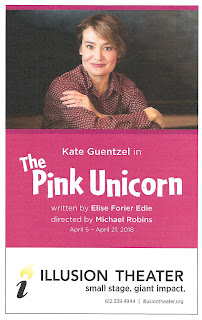 When you need to dig in your purse for a tissue to blow your nose after seeing a play, you know it was a good one. I don’t cry, but @IllusionTheater #pinkunicorn made me cry with its beautiful message of love, hope, & acceptance.
#tctheater #bringtissues #openheart #walkwithme

Thus reads my 280-character immediately post-show Twitter review of Illusion Theater's production of the one-woman show The Pink Unicorn. Kate Guentzel plays the widowed mother of a teenage girl who one day says she doesn't identify as a girl, she's gender queer. In Elise Forier Edie's beautifully written play, we witness this small town woman's journey to reluctant activist, all for the love of her child. With this very personal script in Kate's deft hands, it's an incredibly moving experience. The Pink Unicorn plays for three weekends only, so waste no time in making your way to Illusion's inviting space on the 8th floor of the Hennepin Center for the Arts in downtown Minneapolis (click here for more info and to purchase tickets).

Trisha tells us her story (which has some parallels with the playwright's experiences) in a very casual and conversational way, speaking directly to the audience, and sometimes responding to our reactions. Not that she goes off script, I'm sure, because the script so eloquently and specifically draws a picture of this woman, her small Texas town, and all of the other characters in the play. Kate plays them all, donning different speech patterns and mannerisms to embody everyone from the sullen but sweet teenager to Trisha's Southern belle mother, the aptly named Pastor Dick, and the bigoted school principal.

This isn't a story of Jo's struggle (formerly called Jolene, with the preferred pronoun they). Jo knows who they are and is relieved and excited to finally live their true life. This is a story of Trisha's journey into places she never thought she'd go. The story of a mother who loves, supports, and believes her child and will do anything to protect them, even if she doesn't understand them. Trisha contacts the ACLU and sues the school when they won't allow Jo to start a Gay Straight Alliance club, and helps organize a protest in front of the school board offices. She leaves her church, befriends a lesbian, argues with her mother, and begins to see her alcoholic brother differently.

We in the audience are lucky to go on this journey with Trisha, this ordinary, imperfect, human, extraordinary woman, so fully embodied by Kate Guentzel. I heard the words "tour de force" uttered amongst the audience after the show, and I can't disagree. With help from director Michael Robins, she hits all the notes from comedy (lots of cute Southern colloquialisms) to utter heartbreak (the grief at losing her husband and having to navigate this and every challenge without him). The 90-minute show passes in a flash of continuous storytelling, utilizing well the simple and homey space, warmly lit, so that we can almost see what Trisha is telling us about (set design by Dean Holzman, lighting design by Mike Wangen).

This feels like such an important play at this moment, when LGBTQ rights and visibility are at an all-time high, but when the risk of all of that being taken away seems frighteningly real as well. Trisha's advice after all that she went through is to walk together, hands joined, hearts open, and listen. It's children like Jo and mothers like Trisha that will bring about positive change change in this world, as we've seen happen in real life recently too.

I'll leave you with a few words from the playwright (from a note in the playbill, which also includes tips on being a trans ally).


I don't know that I ever found the answers to those questions. I mean, all I did was write a play. But in searching for the answers, I found a voice that allows me, at the very least, to engage with, and have compassion for, people who are so different from me. And it helped me imagine a world where my own kid won't be excluded from a free, supportive, rich and purposeful life.

The Pink Unicorn continues through April 21, and pairs nicely with the new original musical Mermaid Hour: Remixed playing this month at Mixed Blood Theatre, another wonderful and relatable story of a trans child and her family.