Broadway Tour of "Jersey Boys" at the Orpheum Theatre 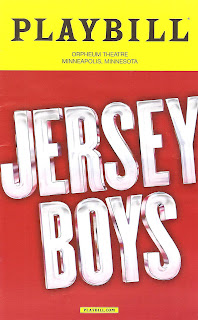 Jersey Boys is my musical theater guilty pleasure, and the exception that proves the rule about jukebox musicals. Meaning, I'm not usually a fan of taking popular hit songs and creating a musical around them; I much prefer new original musical theater. Except for Jersey Boys, which I can't help but love and see every time it comes to town (four and counting). After running for over 11 years, the Tony-winning musical closed on Broadway last year, but is still touring the country, stopping at Minneapolis' Orpheum Theatre this week. The reason I love it is not just because of the fantastically catchy music of Rock and Roll Hall of Famers Frankie Valli and the Four Seasons, the sharp choreography, and the retro fashions. But because all of this is put together very smartly in the true story of the group, dealing with the good and the bad of fame and living in the music industry. If you've seen Jersey Boys at some point in the last 12 years, you know what I'm talking about. If not, it's not too late to check out this smart, funny, and musically delicious jukebox musical that gives you a peek inside some of the best known American pop songs of the last century (click here for more info and tickets).

Book writers Marshall Brickman and Rick Elice used the title of the group as inspiration for the structure of the musical. The Four Seasons' story is told in four chapters by each of the group's original members. Founder Tommy DeVito narrates the "spring" of the group's life, in which he and his friends are in and out of jail, working with the mob on the streets of New Jersey. He tries several different band arrangements, all centered around the sweet falsetto of young Frankie Valli. Eventually he hits upon a winning combination, adding bass player Nick Massi, songwriter Bob Gaudio, and producer Bob Crewe (Gaudio and Crewe are credited with writing the music and lyrics for the show). "Sherry" is their first number one hit, and the group's fame skyrockets as Bob Gaudio takes over the narration in the "summer" chapter. More hits, television appearances, adoring fans - their dream has come true. But things begin to "fall" apart as tensions within the group rise and Tommy's large debt is revealed. In the second act Nick takes us through this stage of the journey that leaves only Frankie and Bob left in the group. Finally, Frankie narrates the group's poignant final chapter, "winter," that sees much loss but eventual reconciliation as the group reunites for their 1990 Rock and Roll Hall of Fame induction. It's a roller coaster ride through fame, success, and their aftermath.*

The Four Seasons had dozens of hit songs in the '60s, and many of them are included in the musical. "Big Girls Don't Cry," "Walk Like a Man," " My Eyes Adored You," " Beggin'," and "Can't Take My Eyes Off of You" to name just a few. With a few exceptions, the songs are not sung in that musical theater "I'm breaking out in song in the middle of a conversation and singing my thoughts and feelings" sort of way, but rather within the context of a concert, rehearsal, or recording session, so that it falls more towards the "play with music" end of the music-theater spectrum. This musical isn't structured in the typical scene-song-applause kind of way; the music is woven organically into the story, and sometimes we just hear snippets of songs interspersed with narration. The audience isn't given a chance to applaud at the end of every song, so when the first big number came towards the end of the first act, as the boys sang "Sherry" and paused after that final note, the audience burst into enthusiastic applause we'd been holding in for the first part of the show.*

The story takes place in a variety of locations represented on a mostly sparse two-level set. For their TV appearances, we're watching the guys sing into the camera on the side of the stage while the video is projected on a screen at the back of the stage. The configuration then shifts so that they're singing out from the stage, as we willingly play the role of the audience. The entire thing is really smartly structured. Another nice touch are pop art illustrations on the video screen that are used sparingly to convey scene or tone.*

Comparing to the 2008 Playbill (the first tour I saw), the cast size has been pared down somewhat to a cast of about a dozen, which seems much larger as most ensemble members play multiple characters, almost unrecognizable from scene to scene. The band also looks smaller, with no reeds or horns listed in the current incarnation. But both appear onstage a few times, and I think they are really being played (by ensemble or orchestra members), at least for a few key sections. And if the actors playing the Four Seasons aren't really playing their instruments on stage, they give a great impression of it.

Which brings me to this cast, who are really fantastic. In addition to the hard-working ensemble, the four leads are all wonderful, including understudy Ben Bogen, infusing Frankie with a lot of heart (if not the prettiest falsetto I've ever heard); Corey Greenan as the tough-talking Tommy; Tommasco Antico as the sweet and reliable Bob; and Chris Stevens (who shares a name with my favorite TV character of all time) as the tall and mostly silent Nick. They gel so well as a band, with a prickly chemistry that works, that when they reunite at the end after some time apart it's like seeing old friends together again.

Jersey Boys is a pretty reliable good time. Yes, the misogyny of the '60s and the music industry is hard to take at times, and there's little diversity in the cast. But as the story of specific people in a specific time, who created music that's a big part of pop culture, it's pretty great. Jersey Boys continues through this Sunday April 29 only (click here for more info and tickets).

*Much of this post is borrowed from what I wrote about the tour in 2015..